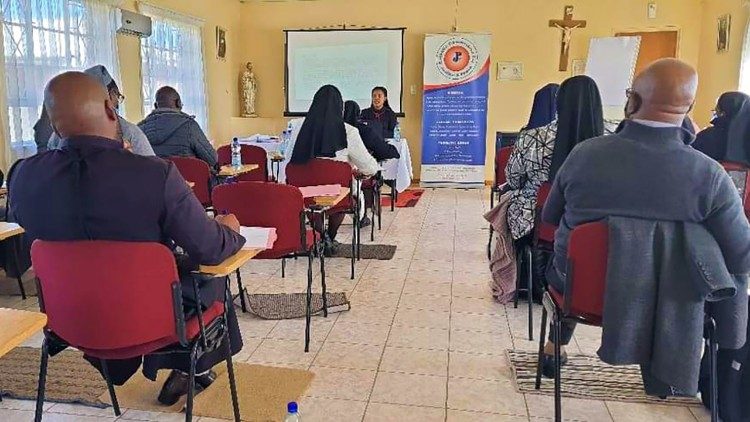 The Catholic Commission for Justice and Peace (CCJP) in Lesotho recently held a one-day workshop for religious congregations on how best to care for migrants, refugees and people on the move.

The Lesotho workshop organised by the Catholic Commission for Justice and Peace (CCJP) under the Lesotho Catholic Bishops Conference was held at the Sisters of St. Joseph’s Elizabeth Residence in Sekamaneng.

The main objective was to train religious congregations on pastoral care for migrants and refugees. The workshop was also seen as complementary to the services of Advocacy for Basotho nationals. The latter is about information on the rights nationals have when they cross the border into South Africa -as migrant workers.

According to Sr. Julia Maeeane, Lesotho has seen refugees from the Comoros, Eritrea, DRC and Uganda in recent years.

“The whole idea was to try and bring Fratelli Tutti into our own context of Lesotho. There is not much awareness about the plight of refugees or migrants in Lesotho. Fratelli Tutti, as you know, is the third encyclical of Pope Francis, and it is on fraternity and social friendships. Through this document, we tried to see how we can better relate with refugees, migrants and people on the move,” said Sr Julia in an interview with Sheila Pires of South Africa.

“43% of the households in Lesotho have at least one of its members living away from home,” said Sr Julia. She added, “apart from migrants, refugees and people on the move who come from outside, there is also in Lesotho internal migration. Generally, these are people who come from rural areas to the city in search of employment or due to natural disasters in their areas of origin,” she said.

Lesotho is located in Southern Africa and is totally surrounded by South Africa. Traditionally Lesotho has been a country that sent migrant workers mainly to South Africa’s mines. For years, migrant work has been an essential source of income for many Basotho families. The decline in South Africa’s mine employment for Basotho has, however, given rise to new forms of migration from Lesotho.

Nigeria: Prayer commemoration for the Owo Pentecost attack to be held 5 July.