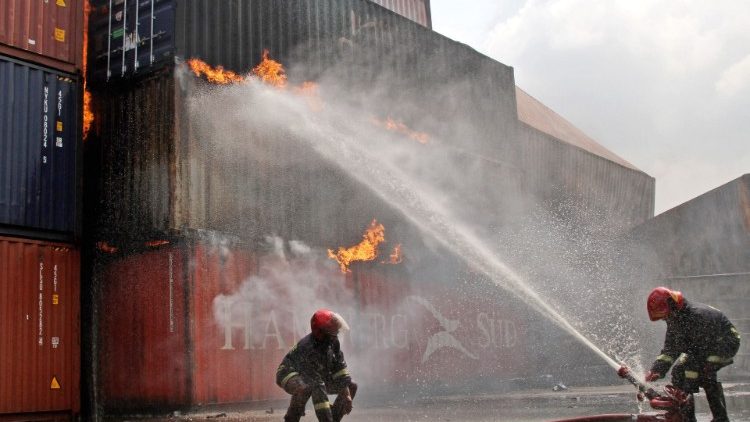 A massive inferno broke out over the weekend at a container depot in Bangladesh, killing at least 49 people, with the death toll expected to rise.

Several dozens people were killed and hundreds others injured after a huge fire tore through a shipping container depot in Sitakunda, near the busy southern port of Chittagong, Bangladesh, over the weekend.

Hospitals in the area have been overwhelmed with the casualties, and some of the injured have been transported to the capital, Dhaka. Medics have appealed for blood donations.

The death toll has reached 49 but is expected to rise, with many of the about 300 injured in critical condition caused by life-threatening burns.

While the cause of the fire is unconfirmed, reports say that hundreds of firefighters, volunteers and police arrived at the scene to help to douse the flames which began on Saturday night.

As they battled the blaze, a number of containers holding chemicals exploded, engulfing many of the rescuers in flames and throwing debris and people into the air.

Smoke rising from the container depot in Bangladesh

Reports say that the powerful explosion shattered the windows of nearby buildings and was felt several kilometers away.

Online images of the aftermath from the scene show burnt-out, upturned containers amid a lot of debris scattered all over the ground as rescue efforts continued through Sunday.

Firefighters, police and some volunteers were among those killed in the blaze. Officials say that at least 9 firefighters were killed and about 10 others were in hospital with serious burns.

Sitakunda, about 40km from Chittagong (Bangladesh’s main sea port), acts as a transit point for goods traveling through the port. Officials say around 4,000 containers are stored at the Sitakunda depot, with some of them containing millions of dollars in garments waiting to be exported.

Bangladesh is a major clothing supplier to Western nations, and has become the world’s second-largest exporter of garments over the last decade.

Officials inspect the debris at the site

Not the first incident

This is not the first incident of industrial accidents in the country. In December, at least 38 people were killed after a fire destroyed a launch on the Sugandha River in the southern district of Jhalakathi.

In 2020, three workers were killed after an oil tank exploded in another container depot in the Patenga area.

On Sunday, a local Bangladeshi newspaper said that at least 26 blazes in factories have killed more than 2000 workers and employees since 2005.

Cardinal Onaiyekan: Christians and Muslims united against violence in Nigeria