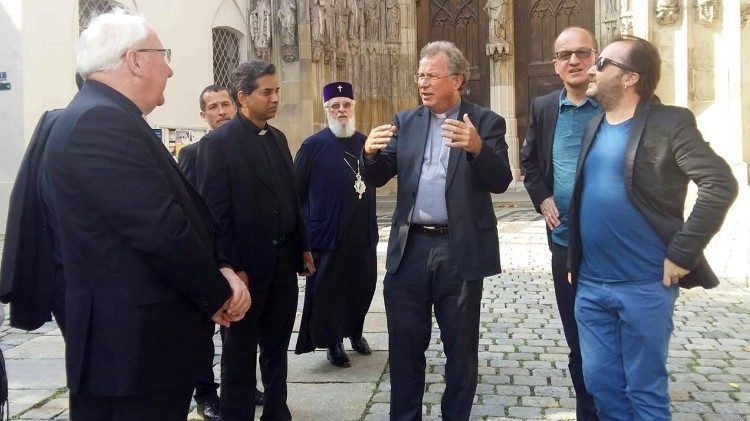 The phenomena of immigration – the situation of migrants and especially of refugees – is a joint Christian responsibility. Ecumenical cooperation can strengthen the common witness of churches in a world which is currently being divided by this ongoing crisis.

In a press statement released Friday, Bishop Brian Farrell, Secretary of the Pontifical Council for Promoting Christian Unity and Prof. Ioan Sauca from the World Council of Churches (WCC) gave accounts of the growing collaboration on vital issues of common concern. These issues range from the work for Christian Unity with dialogue on doctrinal and moral issues, to mission, education and interreligious dialogue and from climate change to peace building, migration, and youth. Examples were used of some of their most recent collaborations, such as the ecumenical celebration of the World Day of Prayer for the Care of Creation, in Assisi. There is a pilgrimage currently taking place for climate change, from Assisi to Katowice, Poland, where the next United Nations Climate Change Conference, in December, is due to be held.

One of the documents produced addresses peace-building in situations of conflict and violence. It takes into consideration the impact that culture, religion and violence have on the ongoing quest to resolve conflicts and to promote a culture of peace. It reminds all Christians that they should be co-workers in God’s mission of building this culture of peace, by affirming that Jesus Christ sends his disciples as peace builders to be agents of healing, reconciliation and unity. The document also states that for our societies, the situation concerning migrants and refugees constitutes a challenge and, at the same time, an opportunity.

Reflecting on what threatens peace, the text offers recommendations to churches that are active in this field, taking into consideration the union of individual, social and political responsibilities.

Opportunity lies within a challenge

An international conference will take place in Rome in late September, during which, the Vatican Dicastery for Promoting Integral Human Development, along with the WCC, and in collaboration with the Pontifical Council for Promoting Christian Unity will respond to the harmful realities surrounding xenophobia, racism and populist nationalism, all within the context of migration.

A small village with room for everyone

This year’s Joint Working Group meeting took place in the small German community ofOttmaring. Over recent months, this small village has opened its doors to a number of refugee families from Syria as well as a number of young unaccompanied migrants. A meaningful location strongly committed to promoting dialogue and reconciliation among churches, religions and cultures.

The full press release is below:

The Joint Working Group (JWG) between the Roman Catholic Church (RCC) and the World Council of Churches (WCC) met in Germany for its annual plenary session from 3-7 September 2018. The encounter focused particularly on developing two documents on ecumenical collaboration in peace-building and migration.

Under the leadership of the two co-moderators, Metropolitan Nifon of Targoviste from the Romanian Orthodox Church and the Catholic Archbishop of Dublin Diarmuid Martin, the meeting began with reflections on the ecumenical commemoration of the 500th anniversary of the Reformation in 2017 by Bishop Heinrich Bedford-Strohm, Chairperson of the Council of the Evangelical Church in Germany (EKD). This was followed by a presentation on the recent visit of Pope Francis to the Ecumenical Centre in Geneva and the Ecumenical Institute in Bossey delivered by WCC General Secretary, Rev. Dr Olav Fykse Tveit. Both the Reformation anniversary and the visit of the Pope to Geneva testify to a new momentum in ecumenical relations.

This analysis was confirmed in reports by Bishop Brian Farrell, Secretary of the Pontifical Council for Promoting Christian Unity (PCPCU), and Prof. Ioan Sauca, Deputy General Secretary of the WCC. They gave accounts of the growing collaboration on vital issues of common concern ranging from the work for Christian unity with dialogue on doctrinal and moral issues, to mission, education and interreligious dialogue, and from climate change to peace-building, migration and youth. Most recent examples of intentional cooperation were a joint delegation to the Democratic Republic of Congo to promote reconciliation and peace ahead of forthcoming elections in the country and the ecumenical celebration of the World Day of Prayer for the Care of Creation in Assisi. A pilgrimage for climate justice is taking place from Assisi to Katowice, the site of the next Climate Change Conference of the United Nations.

Significant time was dedicated to the drawing up of two new documents on peace-building and migration.

The first document addresses peace-building in situations of conflict and violence. It considers the impact of culture, religion and dialogue on the resolution of conflicts and the promotion of peace. Christians are called to be co-workers in God’s mission of building a culture of peace which should also permeate all areas of church life and mission. This mission includes a commitment to ecumenical, inter-religious and inter-cultural dialogue, and to cooperation for justice and peace.

The text reflects on what threatens peace from these same three vantage points. It also asks what contributes to peace from these three perspectives. Starting with the affirmation that Jesus Christ sends his disciples as peace-builders to be agents of healing, reconciliation and unity, the text attempts to carefully consider the nexus between individual, social and political responsibilities and offers recommendations to the churches regarding their activities in this field.

Migration is one of the salient phenomena of the contemporary world, a significant “sign of the times”. The JWG is emphasising that ecumenical cooperation in caring for migrants, and in particular, for refugees, is a shared Christian responsibility and can strengthen the common witness of the churches in a deeply divided world. Among various issues of concern in the modern world, the JWG decided to reflect on this issue with the purpose of providing pastoral and practical recommendations that can foster ecumenical cooperation. According to the document in preparation, migrants and refugees constitute for our societies and churches a challenge and an opportunity at the same time.

Shortly after the meeting, the Vatican Dicastery for Promoting Integral Human Development and the WCC, in collaboration with the PCPCU, will respond together to the deeply dividing and painful realities of xenophobia, racism and populist nationalism in the context of migration with an international conference scheduled for 18-20 September in Rome.

This year´s JWG meeting took place in the village of Ottmaring near Augsburg, at a centre, jointly run by the Catholic Focolare Movement, which includes members of other Christian churches, and the Protestant Fellowship of Common Life. The centre, which is a result of the ecumenical cooperation that was inspired by the Second Vatican Council, is this year marking the 50th anniversary of its foundation. Over recent months, the community has opened its doors to several refugee families from Syria and to a number of young unaccompanied migrants. With its strong commitment to promoting dialogue and reconciliation among churches, religions and cultures, it was a very meaningful place for a meeting that continued to reflect on the challenging issues of peace building and migration.

During a visit to Augsburg, the group met the Catholic Bishop of the city, Konrad Zdarsa. The Bishop introduced the group to the church history of Augsburg and the current pastoral and diaconal work in the diocese. Augsburg has an impressive history of religious tolerance and peace. The city recalls the 1530 Augsburg Confession, a foundational document of the Lutheran tradition, and the signing of the Joint Declaration on the Doctrine of Justification by the PCPCU and the Lutheran World Federation in 1999.

The Group also discussed its future work, including a proposal for a digital edition of the JWG texts and an accompanying communication project.

Looking ahead to the 1700th anniversary of the First Ecumenical Council in 2025, the group reflected on the ecumenical significance of confessing the Apostolic Faith through the Nicean-Constantinopolitan creed in a fast-changing ecclesial landscape.

The new momentum in ecumenical relationships inspires and encourages the JWG to continue its mission of promoting genuine collaboration between the Roman Catholic Church and the World Council of Churches.

Brothers united in faith and vocation