Brothers united in faith and vocation 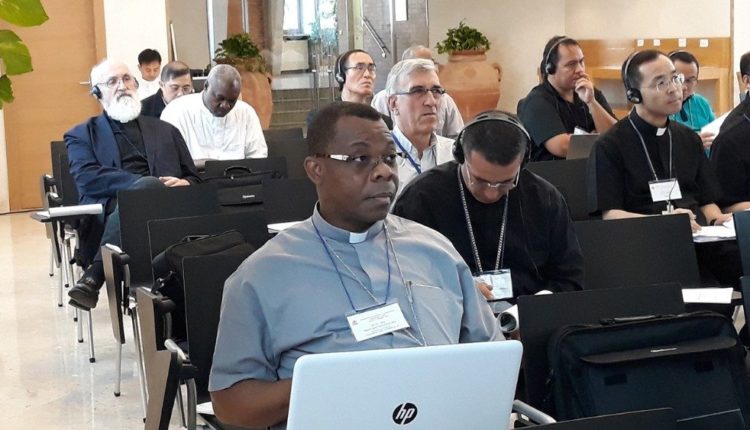 Bishops who have been ordained within the last two years in dioceses which are still considered mission territory have gathered in Rome to take part in a Seminar organized by the Congregation for the Evangelization of Peoples from September 3-15. There are 75 Bishops from 34 countries gathered for the Seminar hosted at Collegio San Paolo (Pontifical International Missionary College of St Paul the Apostle) in Rome.

All of the Bishops have two things in common: their faith, and their vocation as Bishops in the Roman Catholic Church. Together they are exploring aspects of the Church that will help them in their service to the People of God throughout the world. Each day they attend 3 conferences led by Prefects of Dicasteries of the Roman Curia, and have the opportunity to meet in language groups to assimilate the content presented.

On Saturday, September 8, the Bishops will concelebrate Mass in St Peter’s Basilica and will be received in audience by Pope Francis. A pilgrimage to Assisi is planned for Sunday.

Several Bishops attending the Seminar spoke with Vatican News about their experiences.

My diocese is enormous

Bishop John Mac William is a member of the Society of Missionaries of Africa. He became Bishop of Laghouat in Algeria in May of 2017. He shared with Vatican News that his diocese covers the entire Sahara and the southern part of Algeria. He describes the size of his diocese in these terms: “10 times the size of Britain, or 4 times the size of France – so it’s enormous”. His role as bishop is to provide pastoral care for the missionary priests, brothers, and sisters working there. “The important thing is to be there amongst the Muslim people. And, of course, by being there we witness to Christ’s love for the whole of humanity”, he said. Rather than preaching, the mission of the Church is a “drop by drop touching the hearts of the people”.

Mission to a young Church

Bishop Athanasius Rethna Swamy was ordained in April of this year. Since becoming Bishop, he said he has been “seriously reflecting on how I can be an instrument of God. And I am very much convinced that I need to be empowered by God daily. Only then can I do something worthwhile”. His Diocese of Ahmedabad is in the Indian state of Gujarat, which is the land of Mahatma Ghandi. He told Vatican News that the people there are peaceful, loving, accepting, and they enjoy dancing. As bishop of a young church founded only 100 years ago, his concern is that his people grow in the knowledge of the faith. Because of the number of broken marriage and suicides, the pastoral priority he has embraced is to guide both laity and priests in following the command of Jesus to love God and neighbor. “Once we grow in love”, he said, “everything else will fall in line.” He believes that if people experience the love of Jesus, there will be fewer broken marriages and suicides as a result.

Sense of the Church

Bishop Gabriel Mendy, the Bishop of the Diocese of Banjul in Gambia says that his assignment has its challenges. He told Vatican News, that he is the first Gambian bishop of his Diocese. “I have the support of the priests and the lay faithful and the religious. And so, I am doing my best to follow in the footsteps of my predecessors”. He says that the presentations have enriched him and he carries away the knowledge that as a bishop he is not “in isolation” but is “in communion with other bishops and with the Holy Father”. “That”, he says, “gives you a better understanding of the sense of the Church”.