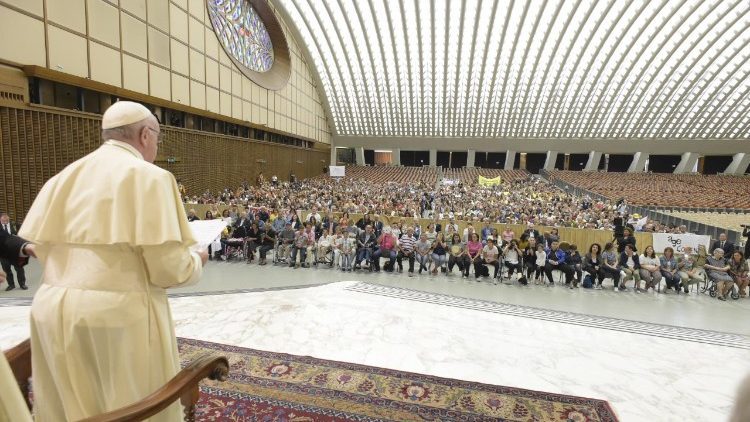 The Italian Parents Association works to support parents in their commitment to family and education according to the principles of Christian ethics.

Praising the Association’s work with reference to the education of children at school, Pope Francis noted the alliance between families and the school system. But he also highlighted that at times this partnership is talked about as being under threat, such as, the family not appreciating the work of teachers, and schools feeling the invasive influence of parents.
To change this situation, the Pope said, “someone must take the first step”, so that trust can be nurtured.

He stressed that without schools and teachers, parents ran the risk of being alone in their “educational activity and being less able to face the new educational challenges that come from contemporary culture, from society, from mass media, from new technologies.”

Referring to his Apostolic Exhortation Amoris Laetitia, the Pope pointed out, “school is not a substitute for parents but is complementary to them.” Therefore, he continued, in school education, collaboration between the various components of the educational community must never be lacking. Without frequent communication and without mutual trust, a community is not built and without a community it is not possible to educate.”

Reinforcing the aspect of collaboration between parents and educators, Pope Francis, recounted a story from his childhood, telling those present that after talking back to his teacher, his mother was called and arrived at the school. Then in front of the teacher his mother told him to apologize, which he did. Pope Francis said, he thought the episode was finished and done with, but his mother had other ideas when he got home.

Pope Francis also commented that it was the task of the Church to help eliminate the educational isolation that families can feel, adding that the Church community was a place where parents could come to receive trust and support.

Concluding his words, Pope Francis told the parents gathered that children “are the most precious gift you have received,” noting that it was their commitment and generosity that would help their children grow in faith and character.