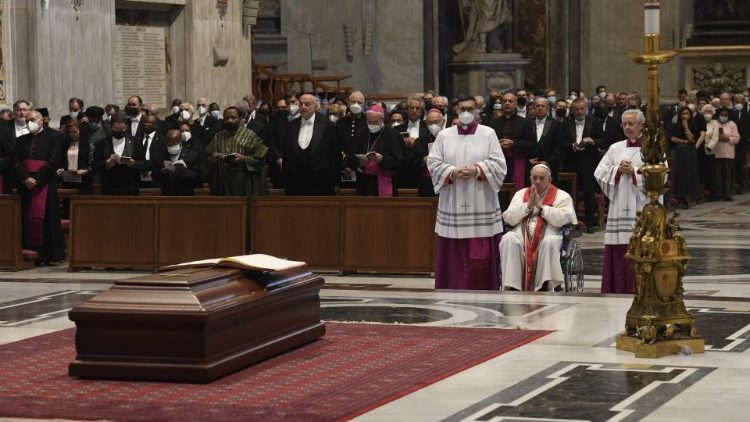 Pope Francis gave the valediction at the conclusion of the funeral Mass for Cardinal Angelo Sodano. During the Mass, the main celebrant, Cardinal Giovanni Battista, recalled the former Secretary of State’s love for Christ and his faithful service to the Church and the Pope.

On Tuesday morning, the Church bid farewell to former Secretary of State Cardinal Angelo Sodano, at a Requiem Mass celebrated by Cardinal Giovanni Battista Re.

Pope Francis offered the final valediction at the conclusion of the liturgy, commending the soul of Cardinal Sodano to the mercy of Almighty God.

Six decades of service to the Holy See

In his homily during the Mass, Cardinal Re recalled Sodano’s seventy-one years of priesthood and over sixty years of service to the Holy See.

“In his long years of service to the Holy See, Cardinal Sodano firmly believed in Christ and followed Him faithfully, serving Him with love and dedication to the Church and His Vicar.”

Cardinal Re noted that after being ordained in 1950, Sodano began his priestly service by teaching theology in the diocesan seminary and engaging in youth ministry.

The late cardinal entered the service of the Holy See in 1961, serving in nunciatures in Latin America during the Second Vatican Council and its immediate aftermath. Later, beginning in 1968, he was engaged in diplomatic work in Eastern Europe at the height of the Cold War.

“In the nearly 16 years that he was the Pope’s first Collaborator, he worked with competence and dedication on behalf of peace.”

EU agrees to block most, but not all, Russian oil