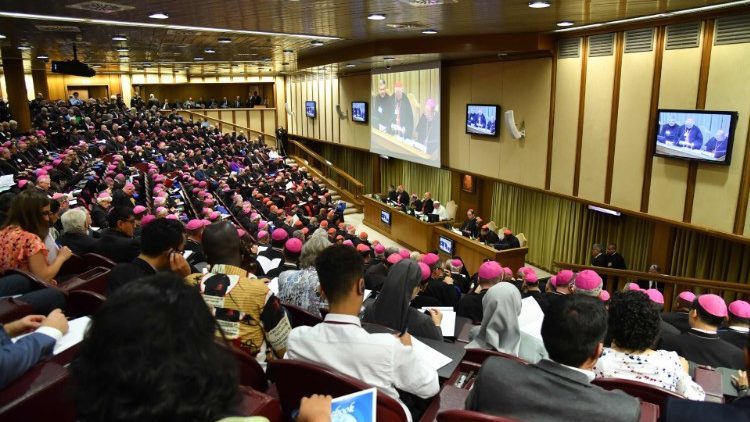 It demonstrates the importance of the event, the fact that Joseph Sapati Moeono-Kolio feels more privileged than excited to be here.

“Yeah”, he said, “I think excited is a broad term when it comes to anything to do with the Vatican…”.

However, he is hopeful, and perhaps this is the most important aspect of his emotions. “I think the more accurate term is more ‘hopeful’”. He said there’s a tremendous sense of hope among young people, Including himself – though at the youthful age of 31 he doesn’t feel particularly young. “According to Catholicism I’m still relatively young”, he said.

He is also feeling “quite privileged to be here” and to be able to transmit that hope, as he represents young people from Samoa and New Zealand

Not abstract but direct

Joe said he “very much” liked what he is hearing at the meetings of bishops. He is optimistic. After having talked to the other young people, their fears of the discussions, he admitting that they were expecting “very abstract concepts and stuff”. Joe said he was comforted by the fact that what they have heard so far are “bishops who were very much in tune with what young people were wanting”. He said they were “very direct with their language” and “very ambitious with what they want to do when they get back”.

Joe recognised that some of the challenges being faced in Oceania are similar to those faced globally. He hopes to transmit to the bishops the need for the Church “to help with things like sustainable development.” He also mentions climate change, which he thinks is “a huge thing, affecting us as well.”

Joe is active on social media, as young people often are, and is using this as a way to update people “back home” with the progress of the Synod.

Help Church be an effective guide

He is hoping to express to the Synod Fathers “the realities that we face in my part of the world”, and how he thinks the Church can “maneuver itself so that it can be a more effective guide to young people” through his experience with the Church, acknowledging that this should be done “without obviously having to water down its teachings, or anything like that”.

Joe talks about the challenges facing young people, mentioning the Digital Age, and the “challenges that come with a more technologically savvy generation”, stressing on the “inherent dangers that that opens them up to.” To him, the Church needs to become equally savvy towards that, because if it’s not, “it won’t be as effective a guide to young people”.