Women religious called to be prophetic voice of Synod 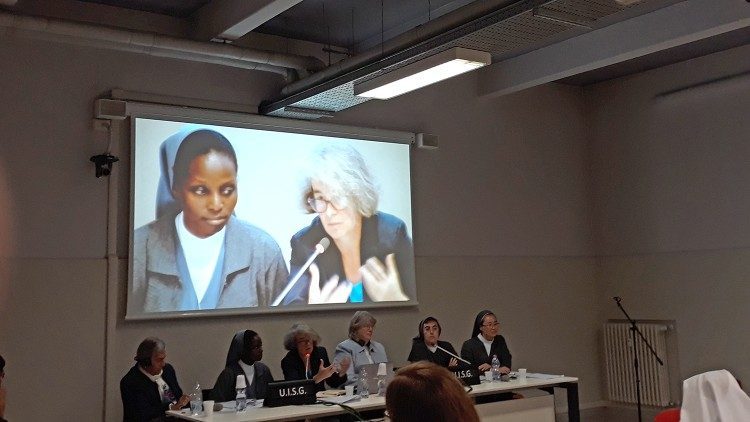 On Monday evening, the day after the Synod concluded, 6 women religious representing the International Union of Superiors General (UISG) met with women religious, ambassadors to the Holy See and journalists. They reflected on how women religious can make the Synod bear fruit in the lives of young people.

Young people’s needs and dreams should be part of the meetings and planning at every level of religious life, Sr Sally Marie Hodgdon, Superior General of the Sisters of St Joseph of Cambéry, said. Religious are the “memory”, the “prophetic voice” moving the Synod forward, reminding the Church what happened at the Synod and living the spirit, she said. This means reminding the Bishops of some ideas that came out of the Synod, such as, the creation of diocesan youth councils, synods of young people in the local churches, and the inclusion of youth in Bishops’ Conference meetings using the Synod method.

Religious life itself needs to undergo a conversion, several of the sisters said. Sr Allesandra Smerilli said that women religious need to open up their convents to allow young people in. In addition to being available to them for accompaniment, women religious need training. “Are we ready?” she asked.

Sr Mina Kwon, mentioned that she is disappointed that there is not more about overcoming clericalism in the Final Document. “It needs to be overcome before it’s too late”, she said. On the other hand, Sr Mina said that the Synod took place in the corridors and over meals and not just in the Synod hall. There, she was encouraged to keep speaking out. Because of this she is going back to Korea feeling called to continue working to overcome this sense of “superiority, and entitlement”.

Regarding the absence of a message for those who feel marginalized due to their sexual orientation, Sr Nathalie Becquart responded that the discussion of same sex relationships is stronger in some parts of the world than in others. Some countries are open to the topic whereas it bears the death penalty in others. One young person said that he could be killed if the topic were to appear in a document in which he participated drafting.

Sr Lucy Muthoni Nderi picked up the discussion saying that the Church is not ready to respond. The Bishops did not want to give “ready-made answers”. The Church needs time, Sr Lucy said, in order to understand. The message from the Synod is that discrimination does not belong in the Church. Jesus began with the lived experience of each person and brought the person on a journey toward accomplishing his dream for them.

Sr Lucy also reiterated the request from young people who said they want to hear the Church’s wisdom regarding the body and sexuality. Young people would like us to listen to them before we start listing the prohibitions and doctrine which turns them off, she said.

When asked about the request from young people for both clarity from the Church, but also an accompaniment from fellow Catholics who can admit that they don’t know everything, Sr Lucy Muthoni Nderi responded. She said that young people seek clarity regarding the Church’s teaching, but vulnerability from those who accompany them, who can share the same faith journey. The relational approach, Sr Lucy continued, can teach a lot that includes doctrine, but that also manifests the face of Jesus. Young people seek credible and trustworthy adults to accompany them –  adults who are not perfect but who are on the path to holiness.