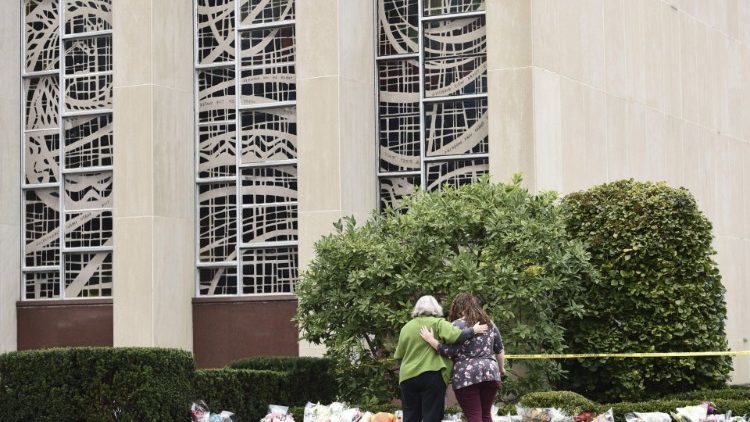 The Bishops of the United States are expressing their support for the Jewish community, in the wake of a mass shooting at a synagogue in the city of Pittsburgh.

Eleven people were killed when a gunman entered the Tree of Life Synagogue in Pittsburgh on Saturday. Six others were wounded in the attack, including four police officers. The suspected assailant is in custody.

In separate statements, the President of the United States Conference of Catholic Bishops (USCCB), Cardinal Daniel DiNardo; and the Chair of the USCCB’s Committee for Ecumenicsm and Interreligious Affairs, Bishop Joseph Bambera, both said the US Bishops stand with the Jewish community.

Following the tragic shooting this morning at Tree of Life Synagogue in Pittsburgh, Pennsylvania, Cardinal Daniel N. DiNardo of Galveston-Houston, President of the U.S. Conference of Catholic Bishops (USCCB)  issued a statement calling for prayer and action to put an end to violence.

The full statement is as follows:

This morning violence, once again, struck one of our communities, this time in Pittsburgh, Pennsylvania. It is apparent at least eight souls lost their lives in a shooting at Tree of Life Synagogue. To our brothers and sisters of the Jewish community, we stand with you. We condemn all acts of violence and hate and yet again, call on our nation and public officials to confront the plague of gun violence. Violence as a response to political, racial, or religious differences must be confronted with all possible effort. God asks nothing less of us. He begs us back to our common humanity as His sons and daughters.

I commend to our Lord the victims, including first responders, and for the consolation of their families. May Almighty God be with them and bring them comfort at this tragic time.

Bishop Joseph Bambera, Bishop chair of the Committee for Ecumenism and Interreligious Affairs for the United States Conference of Catholic Bishops, released the following statement regarding the violence in Pittsburgh.

Yesterday morning, death and violence entered a house of worship. The attack on the Tree of Life Synagogue in Squirrel Hill, Pittsburgh, is a cowardly act and to be condemned by all Americans. Those killed and injured represent the best of who we are: people of faith gathered to pray and celebrate the birth of a child and officers responding to the ensuring violence with no concern for their own safety.

Anti-Semitism is to be condemned and has to be confronted by our nation. The Committee on Ecumenical and Interreligious Affairs of the United States Conference of Catholic Bishops stands with our Jewish brothers and sisters during this time of great distress. May God grant peace to the dead, healing to the injured, and comfort to the families of those hurt and killed and to all the Jewish Community.