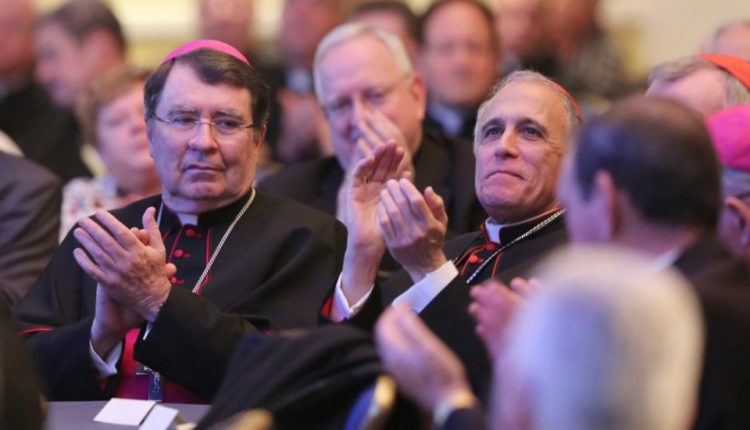 Two weeks from today, the bishops of the United States will gather in Baltimore for their most consequential meeting since Dallas in the summer of 2002, when the clergy sex abuse crisis at that time produced the Charter for the Protection of Children and Young People and its zero tolerance approach to the sexual abuse of children. Are the bishops today, with the leadership they have, up to the task? And, what are those tasks?

The biggest difference between 2002 and today, and the first issue the bishops must confront, is whether or not they wish to remain Roman Catholics or if they will become Protestants. In 2002, it was unthinkable that a former apostolic nuncio, the personal representative of the pope to this country, would publish a long screed that ended by calling for the pope to resign. In 2002, it was unthinkable that a substantial number of bishops would issue statements attesting to their belief in that ex-nuncio’s integrity while not mentioning the pope at all or affirming their loyalty to the pope in the most meager of terms. In our Catholic ecclesiology, it is Christ who is the head of the church, but the pope is the visible sign of our unity as Catholics. Apart from Peter, there is no Catholic unity.

Some bishops were more fulsome in their support for Archbishop Carlo Maria Viganò than others. “I can attest that [Viganò] is a man who served his mission with selfless dedication, who fulfilled well the Petrine mission entrusted to him by the Holy Father to ‘strengthen his brothers in the faith’,” enthused San Francisco Archbishop Salvatore Cordileone. “Although I have no knowledge of the information that he reveals in his written testimony of August 22, 2018, so I cannot personally verify its truthfulness, I have always known and respected him as a man of truthfulness, faith and integrity,” gushed Bishop Thomas Olmsted of Phoenix, Arizona. Bishop Daniel Thomas of Toledo, Ohio was more weasely, stating, “Personally, this situation is made all the more gut-wrenching as I struggle to reconcile my knowledge of Archbishop Viganó, for whom I have a high regard, with my deepest love and respect for the office of the Holy Father.” The bishop loves the office, but not the pope himself? That is a level of dualism we haven’t seen since the 1950s. Bishop Joseph Strickland had a letter ready to be read at all Masses in his diocese within hours of Viganò’s first attack on the pope, in which the bishop of Tyler, Texas said he found Viganò’s allegations “credible.” Was he part of the cabal that hatched and planned the dissemination of the Viganò statement, a cabal that we know included LifeSiteNews, Edward Pentin of the National Catholic Register, conservative Catholic blogger Marco Tosatti, and conservative Catholic plutocrat Tim Busch?

How to confront this lack of loyalty to the pope? At the beginning of every meeting of the bishops, one of the first items of business is an address from the papal nuncio. I suggest that Archbishop Christophe Pierre, the current nuncio, announce to the bishops that, in light of the outrageous behavior of his now notorious predecessor, before he begins his address, he would like to repeat the oath of loyalty to the pope he took when he became a bishop. And, seeing as every bishop in the room took that same oath when they were consecrated a bishop, Pierre should invite the body of bishops to stand and renew their oath of loyalty to the Supreme Pontiff with him as well. It would be a powerful reminder of how screwy and upside-down everything became this summer. I shall be in the room and will be watching to see if Strickland, or Thomas, or Olmsted or Cordileone cross their fingers while they repeat the words.

The second issue the bishops must confront is that many faithful people do not trust them anymore, especially on the issue of clergy sex abuse. After the 2002 Dallas meeting, most Catholics understood that while almost all the bishops had responded to the fact of clergy sex abuse in an inadequate way, they were willing to more or less look forward, accepting the bishops’ pledge of zero tolerance for clergy sex abuse. Certainly, the number of cases plummeted and no one can so much as volunteer to work with children without going through safe environment training. But, then we learned that Bishop Robert Finn had not taken prompt action against a sexual predator, nor had Archbishop John Nienstedt. We were relieved when Pope Francis demanded the resignation of both prelates. Now, it appears that other post-2002 exceptions to the zero tolerance policy are being discovered, chronically in Buffalo, New York, episodically elsewhere. This must stop and the people of God no longer trust the bishops to police themselves.

There are four intertwined but distinct issues relating to sex abuse that the bishops must face. First, and despite the canonical difficulties, they must extend the norms of the Dallas zero tolerance policy to themselves. The Administrative Committee has evidently already approved setting up an independent third-party reporting mechanism, and Cardinal Blase Cupich, in his interview with my colleagues Josh McElwee and Heidi Schlumpf, pointed to a way around the canonical difficulty: The bishops can cede their own oversight authority in all cases regarding themselves to a lay review board.

Second, and relatedly, they must work with Rome to create a process for holding themselves accountable not for abuse itself but for negligence regarding enforcement of the zero tolerance policy against all credibly accused perpetrators. The already mentioned forced resignations of Bishop Finn and Archbishop Nienstedt indicate that this can be done, but the sad case of now ex-cardinal Theodore McCarrick is a counter-indicator, suggesting that there is no consistency in the process: McCarrick should have been removed from public ministry after the twin settlements with seminarians in 2005 and 2006. One additional form of negligence that can no longer be tolerated — failure to publish the names of credibly accused priests. I understand that this entails what one bishop described to me as “excruciating issues of justice,” but the fact is that if they do not publish the names, local law enforcement will do it for them.

The McCarrick case also points to what will be the thorniest challenge facing the bishops: They need to devise a code of conduct that deals with sexual misconduct between clergy, including the bishops themselves, and adults. Here, zero tolerance is not the solution. If a priest or bishop sexually harasses a parishioner, they should be removed from ministry. If a priest slips and breaks his vow of celibacy but with someone who is in no sense a subordinate or a spiritual charge, then a case-by-case approach is needed. If a priest’s slip becomes habitual, or it seems to destabilize his personality, as could happen with abuse of alcohol or drugs or gambling, then a review board with lay members should consider his case and possibly recommend removal from ministry.

The fourth aspect of the sex abuse issue that may prove divisive but shouldn’t be is whether or not the bishops as a body will seek to examine the roots of the crisis, or whether they will seek a scapegoat, gays being the most obvious one. I can’t predict how this discussion will turn out. Certainly, conservative media outlets like EWTN and LifeSiteNews have been beating the anti-gay drum for some time, and it has had an effect on the people in the pews. The fact that a study the bishops commissioned showed there is no essential connection between homosexuality and sex abuse does not deter bigots. The bishops must decide whether they will join the bigots or resist them.

I wonder if the bishops will discuss the now obvious failure of their “Fortnight for Freedom” strategy. For six years, starting with their opposition to the Obama administration’s mandate that Catholic-related institutions cover contraception in their insurance policies, the bishops have been waving the flag of religious liberty, warning darkly about government interference in our ecclesial ministries. The campaign took a reasonable concern and blew it out of all proportion, as happens when your general counsel is also a policy advocate and the bishops are willing to adopt the strategy and language of the Becket Fund as their own. We now can see that the general counsel of the bishops’ conference should have been working with bishops on the necessity of publishing the names of credibly accused priests. In 2014, the theme of the fortnight was “Freedom to Serve.” Last year’s theme was “Freedom for Mission.” What will be the theme next year: “Freedom from Scrutiny?” or “Freedom from Attorneys General?” Never in the history of religion in this country has a religious organization been exposed to the degree of intrusion the bishops have brought on themselves. Good job!

There are other issues on the agenda. The bishops will discuss a proposed pastoral letter on racism. I welcome the document’s repeated focus on structural sin and the need for catechesis and preaching against racism. I do not agree that racism is, as the text asserts, a “life issue.” Is that their way of signaling it is really important? The text’s unwillingness to assert a consistent ethic of solidarity that embraces both life issues and issues of social justice is almost comical. But, my biggest objection is the failure to specifically denounce efforts at voter suppression. The Voting Rights Act was one of the crowning jewels of the Civil Rights Movement. The conservative majority on the U.S. Supreme Court has gutted it and Republican legislatures and governors and secretaries of state are adopting all sorts of unjust mechanism to make it harder for minorities to vote. If a specific condemnation of this injustice is not included, the bishops should vote it down. “We also acknowledge those instances when we have not done enough or have stood silently by when grave acts of injustice were committed,” the document asserts. The document’s silence on the issue of voter suppression should not be yet another instance of not doing enough and standing silently by.

One relatively small issue has perked my interest. The bishops are slated to hold their spring meeting next year in Santa Barbara. Despite being counseled to select a less expensive hotel, the leadership of the conference chose the Ritz-Carlton, which was owned by – you guessed it – Tim Busch’s Pacific Hospitality Group until last year. It is not clear if he still owns the property. The image of bishops lounging around such a swanky hotel and spa, when half of the faithful think they should be in jail and the other half think they should be in hell, shows how clueless and out-of-touch some of the conference leaders still are. The California bishops’ conference recently adopted a resolution stating that if the conference is not moved from the $600 per night hotel, they will not attend. Why are the June meetings not held at a seminary or other more modest location?

You never know what will actually transpire at these meetings. Things that are as clear as day to regular people are sometimes opaque to bishops, especially to the culture warriors who get themselves all worked up and sound like an ecclesial version of Sarah Huckabee Sanders. But, this should be obvious to even the dullest of episcopal minds: If they do not establish a regime of oversight in which the laity can police the bishops’ conduct on the issue of clergy sex abuse, they should just call it a day, turn out the lights, and let some other leaders emerge to lead the church forward.