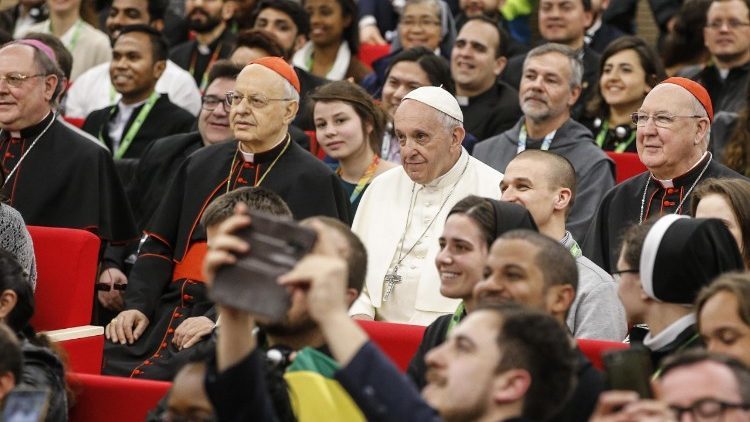 The Synod of Bishops on Young People, the Faith, and Vocational Discernment will begin on Wednesday, 3 October. Young people from all over the world participated in a first-ever Pre-Synod Meeting in March, in Rome, as part of the preparation process for the Synod. 5 young people, representing the world’s 5 continents, addressed Pope Francis during the Pre-Synod meeting in March. Representing the Americas, Nick Lopez, Director of Campus Ministry for the University of Dallas, was one of them. Nick talked about this experience during the Spring General Assembly of the US Bishops Conference in June.

Nick recounted how he received the invitation to address Pope Francis just two weeks before the Pre-Synod Meeting.

I received an e-mail from the Vatican that went something like this: ‘You have been selected to address the Holy Father, Pope Francis, on behalf of the young people of America. Congratulations. Your address is due by the end of the week. Oh, and PS, here in Europe, we consider both North and South America one America. Good luck.’

With the help of USCCB staff, he succeeded handing in on time what he wanted to say. It was important for Nick that the positive and negative realities of the experience of young people be balanced.

Unfortunately, today our popular societal opinion of youth and young adults is that we have a lot of problems, or simply that we are the problem to be solved. Some say we cannot commit, or that we are all addicted to technology, or that we are religiously or spiritually illiterate

He also wanted to emphasize that these issues can be confronted together by strengthening bonds. This was why Nick says he decided to open and close his remarks in Spanish.

While I speak very little Spanish, it was a simple act of acknowledgement and solidarity with our brothers and sisters of Latin America who we in the United States too often struggle to embrace.

Nick soon learned that the issues that he brought up in his address are not exclusive to the Americas. “Each day people approached me with words of thanks and reflection for my address, sharing with me their own similar situations.” It didn’t end there. When he returned home, the messages continued arriving, through e-mail, Facebook and phone calls.

Young people ‘in it together’

Nick says that it is important that the Holy Father heard a common thread in the 5 testimonies he listened to. But he says it was an equally important reminder to young people that they are “not alone, but more importantly,” that they “are in this together”.

About the actually experience of addressing the Holy Father?

Yes, it was an amazingly beautiful experience to address the Holy Father, to embrace him and to hear him say with a hearty giggle, ‘Hablaste muy bien’, ‘You spoke very well’. What marked that experience, however, more than anything else, was his authenticity. It did not feel like a diplomatic meeting or simply a political gesture. It was a real desire to encounter and hear us.