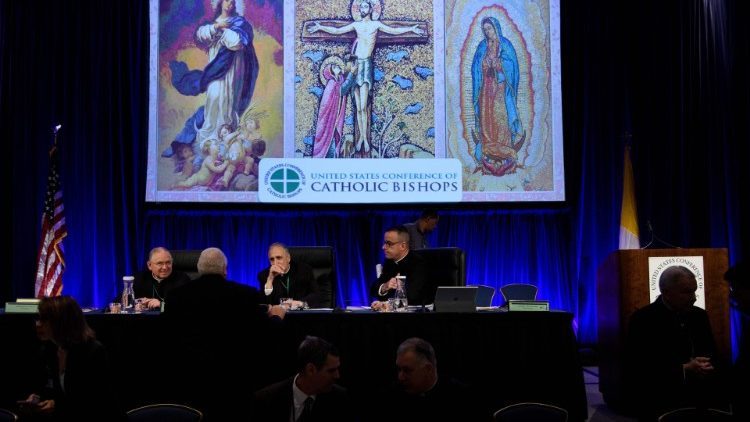 Cardinal Daniel DiNardo, President of the United States Conference of Catholic Bishops, opened the Fall General Assembly on Monday in Baltimore, MD. His opening remarks communicated a last minute change to the agenda made at the request of the Holy See.

The agenda previously proposed for day two of the Assembly (Tuesday) contained discussion and voting regarding “the standards of accountability for Bishops”, and a “special commission for receiving complaints against Bishops”, regarding abuse Cardinal DiNardo said. On Sunday afternoon, Cardinal DiNardo said, he was informed that the Holy See “asked that we delay voting on these so that our deliberations can inform and be informed by the global meeting of the conference presidents that the Holy Father has called for February 2019”. He concluded his remarks saying that even though he is disappointed that the votes will not take place, he is hopeful that this “additional consultation will ultimately improve our response to the crisis we face”.

After hearing this announcement, Cardinal Blase Cupich, Archbishop of Chicago, took the floor. He underlined how seriously the Holy See is taking the abuse crisis. The Holy See, he said, sees it as a “watershed moment, not just for the Church in this country but around the world in putting so much emphasis on the February meeting”. At the same time, he said, “we need to be very clear with you where we stand and we need to tell our people where we stand”.

Motion made to continue the discussion

Cardinal Cupich then made the motion that the planned discussion continue and the document be modified according to proposed amendments. Rather than putting that document to a binding vote, he suggested that they take a “resolution ballot”. In this way, Cardinal Cupich said Cardinal DiNardo would be able to represent the US Bishops well in the discussions to take place at the upcoming February meeting.

“Given the urgency of the moment”, Cardinal Cupich continued, he suggested that a “special session” be held in March “to deal precisely with this issue”. The Conference of Bishops needs to pursue the issue “for the good of the Church in this country without delay”, he said. The Cardinal then added that they will be able to benefit from the planned February meeting. “In fact”, he said, we “may find some new insights that we had not thought of”.

Archbishop Christophe Pierre, Apostolic Nunzio to the US, addressed the Assembly, after which Cardinal DiNardo gave the Presidential Address. The Bishops then were invited to begin the prayer and listening portion of the day which is entitled “Looking at the problem and the harm that has been done”. At various times throughout the day, they will hear from a variety of the faithful on different topics. A layperson will speak about “the accompaniment of a survivor”, a young layperson will present the needs the faithful have regarding their Bishops, and a woman religious will talk about “the Bishop as minister of healing”.

Pope at Mass: bishop, a humble and meek servant, not a prince

4 Reasons Why Many Christians Don’t Go to Church