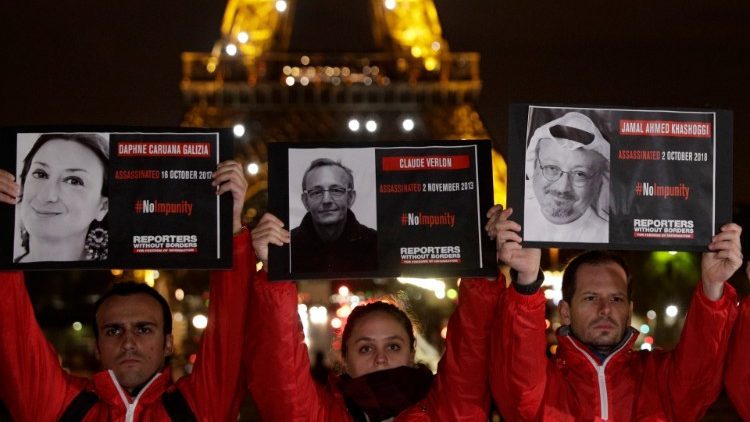 United Nations Secretary-General António Guterres has called on the international community “to protect journalists and create the conditions they need to do their work,” saying the killing of journalists around the world for doing their job is “outrageous” and should not become the “new normal”.

In a video message on the occasion of November 2 International Day to End  Impunity for Crimes Against Journalists, the UN chief noted that in just over a decade, more than 1000 journalists have been killed for reporting the news, and in nine out of 10 cases, the perpetrators have never been brought to justice.

Guterres lamented that in 2018 alone, at least 88 journalists have been killed and many thousands more have been attacked, harassed, detained or imprisoned on spurious charges, without due process.

The UN chief also noted that female journalists are often at greater risk of being targeted not only for their reporting but also because of their gender, including through the threat of sexual violence.

Calling violence against reporters “outrageous”, the Secretary-General said this should not become the new normal.

Reporting not a crime

He expressed deep concern over the growing number of attacks and the culture of impunity, saying when journalists are attacked, societies as a whole pay a price.

Guterres paid tribute to the reporters in the field “who do their jobs every day despite intimidation and threats.”  Their work – and that of their fallen colleagues – he pointed out, reminds us that truth never dies. “Neither must our commitment to the fundamental right to freedom of expression.”

Stressing that “reporting is not a crime”, he called on the international community “to protect journalists and create the conditions they need to do their work.”  “Together, let us stand up for journalists, for truth and for justice”, Guterres appealed.

In a separate message for International Day to End Impunity for Crimes against Journalists, Audrey Azoulay, the Director-General of the UN Educational, Scientific and Cultural Organization (UNESCO) said, “It is our responsibility to ensure that crimes against journalists do not go unpunished.”  She urged that journalists be able to “work in safe conditions which allow a free and pluralistic press to flourish.”

“The fight against impunity is inseparable from the defence of fundamental freedoms such as freedom of expression, freedom of the press and freedom of access to information,” Azoulay said.

On the occasion of the International Day UNESCO is launching an initiative to fuel awareness on the issue of journalists killed on the job.

Called “Truth Never Dies,” it encourages people to share stories by and about fallen journalists to keep their legacies alive and to push for investigations into their deaths to be continued.

A study on global trends in media published by UNESCO in 2017 highlights that impunity for crimes against journalists remains the norm, and trends in kidnappings, disappearances and torture have shown substantial increases since 2012.

The UN Human Rights Council adopted a resolution in September, calling on the international community to promote strategies that protect journalists and bring perpetrators of violence against the media to justice.

This year’s International Day comes close on the heels of the outrageous case of dissident Saudi journalist Jamal Ahmad Khashoggi who disappeared after he entered the Saudi Arabian consulate in Istanbul, Turkey on October 2.  Reports claim the 59-year old was killed and dismembered inside the consulate.