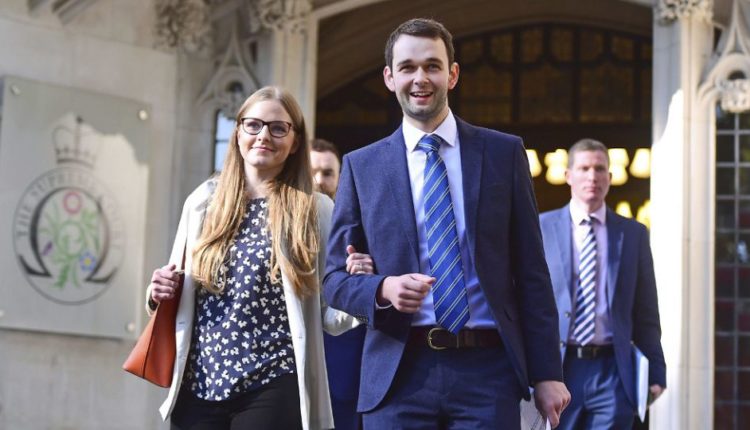 LONDON — On both sides of the Atlantic, a drama set in a bakery has pitted freedom of religion against LGBT civil rights and Exhibit A has been a wedding cake — or as it’s been colloquially dubbed here, a gay cake.

Last week it was the Supreme Court of the United Kingdom’s turn to decide a case, in which a Northern Ireland bakery refused to bake a cake and decorate it with a slogan supporting same-sex marriage. The result was the same as in the Masterpiece Cakeshop case, decided in June, in which the U.S. Supreme Court found for the baker.

The U.K. case began in 2014, when Ashers bakery, run by Daniel and Amy McArthur in Belfast, canceled an order to make a cake bearing the slogan “Support Gay Marriage” frosted on its top.  The customer, a gay rights activist named Gareth Lee, had also asked for characters from “Sesame Street” and the logo of the activist group Queerspace. The McArthurs said that they could not provide the cake Lee wanted, citing their Christian beliefs barring gay marriage.

The taxpayer-funded Equality Commission took up the case and wrote to the McArthurs seeking compensation, later taking them to court. Despite Northern Ireland’s reputation for religious conservatism — it is the only part of the United Kingdom where same-sex marriage is still not permitted — the county court and the Northern Ireland Court of Appeal ruled that there had been unlawful discrimination against Lee.

Last week the court ruled in a unanimous decision that the McArthurs’ refusal to bake the cake was not discriminatory. “Their objection was to the message on the cake not to the personal characteristics of Mr. Lee,” said Lady Brenda Hale, president of the Supreme Court. “They would have refused to make such a cake for any customer, irrespective of their sexual orientation.”

The U.K. case mirrors the U.S. gay cake incident, in which a baker’s refusal to decorate a cake with a gay wedding message also went all the way to the Supreme Court. In June, it ruled that the Colorado Civil Rights Commission had trampled the rights of Lakewood, Colo., baker Jack Phillips when it said his refusal to make a wedding cake for a same-sex couple violated state accommodation laws.

In his opinion for the majority, Justice Anthony Kennedy wrote that the Colorado commission’s decision “was inconsistent with the First Amendment’s guarantee that our laws be applied in a manner that is neutral toward religion.”

In the U.K. case, the judges saw the question as neither about government neutrality nor about art. Instead the court based its opinion on Article 10 of the European Convention on Human Rights, which includes the right “not to express an opinion which one does not hold.”

Hale said, “The bakers could not refuse to supply their goods to Mr. Lee because he was a gay man or supported gay marriage, but that is quite different from obliging them to supply a cake iced with a message with which they profoundly disagreed.”

The court’s distinction appeared to be aimed at treading a delicate path between upholding the right to freedom of religion and the individual right to dignity.

The “gay cake” case has divided Britons, and not just Christians and pro-LGBT campaigners. Michael Wardlow, the head of Northern Ireland’s Equality Commission, which spent 250,000 pounds, or about $330,000, on the case and now has to pay legal costs, said the decision has introduced uncertainty about the legal basis for equality in the U.K. The Rainbow Project, Northern Ireland’s main gay rights organization, issued a statement calling the decision “direct discrimination” and said it had implications for services and facilities for LGBT people.

But in an article for The Times, one of Britain’s best-known gay activists, Peter Tatchell, welcomed the ruling and supported the Supreme Court’s interpretation of the law.

“If the Supreme Court had ruled against Ashers it would have established a dangerous principle that businesses cannot refuse a customer’s request to propagate a message even if it is sexist, anti-gay or xenophobic, and even if they have a conscientious objection to it,” he wrote. “In a democracy people should be able to discriminate against ideas with which they disagree.”

The McArthurs, who were backed by the Christian Institute, a charity set up to counter secularism, saw the making of a cake as fundamental to their faith.

Outside the Supreme Court, Daniel McArthur said: “I want to start by thanking God. He has been with us for the last four years.”