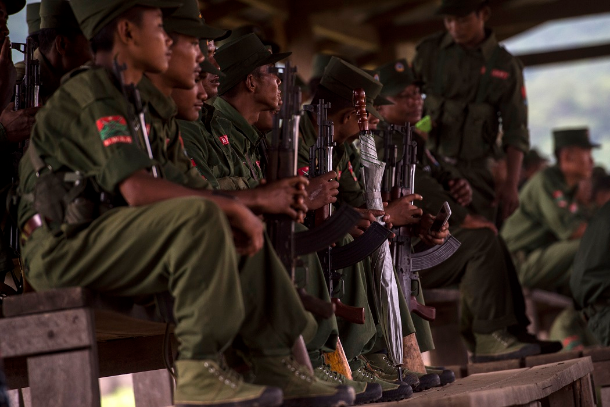 The United Wa State Army (UWSA) has forcibly recruited 41 male and female students in Shan State near Myanmar’s border with China, according to ethnic-Lahu Baptist leaders.Reverend Lazarus, general secretary of the Lahu Baptist Convention in Kyaing Tong, said 92 Lahu Christians were released recently after signing a pledge that they would only worship privately at home, not in churches.However, the students were made to join the militia that grew out of the former Communist Party of what was previously called Burma.”We heard the students who were studying at a Bible school were assigned to different areas after they were forcibly recruited into the Wa army,” Rev. Lazarus told ucanews.com.He pledged to work for their release and called on the UWSA to set them free.Rev. Lazarus added that Baptist leaders intended to meet with Lahu political parties and cultural associations to discuss the situation in the Wa hills region where the abductions and detentions had occurred.Some 52 Lahu Baptist churches remained sealed-off and five had been destroyed.Rev. Lazarus added that he had no idea of how long the crackdown would last.He said the lack of religious freedom was the most dire since missionary work started several decades ago, even though there had been some past problems, and that the situation was continuing to deteriorate.Five Catholic nuns and six lay teachers were expelled from the region by the UWSA as part of a campaign that began Sept. 13 in which the militant group has uprooted so-called “unauthorized” churches.The UWSA announced that all churches in the region built after 1992 were being deemed to have been illegally constructed.Only churches built between 1989 and 1992 were being accepted.The UWSA has banned the construction of new churches and requires that priests and workers in churches be locals, not outsiders.It has also banned religious teaching in schools in the Wa region, while UWSA functionaries have been forbidden from being members of any religious organization.The UWSA leadership has also pledged to punish local administration cadres if they support missionary activities.

The Wa region is home to ethnic groups including the Wa, Kachin, Ta’ang, Lahu, Lisu, Kokang and Shan who observe the faiths of Christianity, Buddhism, animism, spirit worship and Islam.The UWSA has close connections to the communist government of China that has significant economic interests and ambitions in the region. Beijing has long suspected Protestant groups of haboring United-States affiliated spies.Christians comprise around 30 percent of the estimated 450,000 ethnic Wa.The 30,000-strong UWSA — Myanmar’s largest ethnic army — stands accused of being one of the largest drug-trafficking groups in Southeast Asia