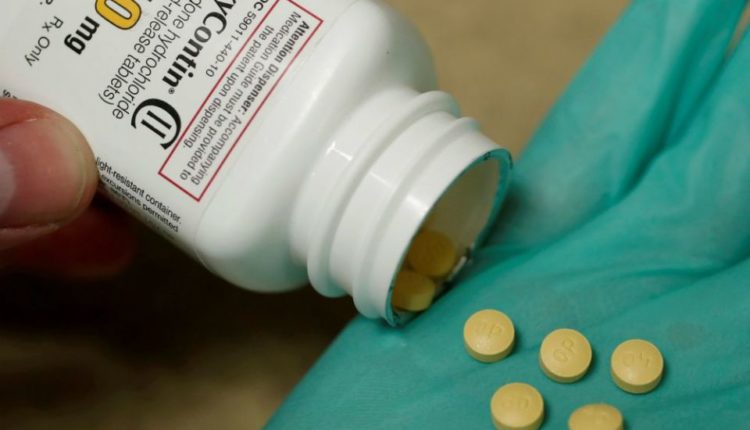 Then came the opioid epidemic. It has swept through America, leaving devastation in its wake, affecting union halls and congregations alike.

In an innovative partnership that may be a sign of collaborations to come, two women with sharply distinct areas of expertise and professional backgrounds are leading a secular-sacred group initiative to reshape the culture of a pharmaceutical industry partly responsible for leaving America awash in addictive pills.

While faith-based and secular groups had banded together to take on Wells Fargo a year ago, said Investors for Opioid Accountability co-leader Donna Meyer, her work with partner Meredith Miller is a “novel experiment. We were the first to put together a coalition, and I guess you could say it’s a model for the future.” Miller is chief corporate governance officer of the United Auto Workers Retiree Medical Benefits Trust.

“It’s wonderful. I do see this as a model for the future,” says Miller. “The coalition is unique in its corporate governance efforts because it brings together investors that have not come together before.”

Meyer, who has a background in healthcare administration and socially responsible investment, is director of shareholder advocacy for Mercy Investment Services, the group that manages the assets of the Sisters of Mercy. She has always worked for Catholic organizations and has been employed by the sisters for so long that her husband jokes she should wear a habit.

Backed up by more than $2.2 trillion in total assets, Meyer says, the 47 publically known members of Investors for Opioid Accountability include faith-based organizations, state, city and labor funds, and asset managers.

While drug companies often strenuously deny that they are at fault, critics charge that they are in large part responsible for launching the epidemic, according to a New York Times article from late May. Manufacturers like Purdue Pharma, the maker of OxyContin, engaged in deceptive marketing, pitching the drug as a safe improvement on the milder opioids that had been available. Manufacturers and distributors flooded communities, particularly poor rural counties, with pills. Doctors, who feared being blamed for undertreating pain, were also rewarded for overprescribing them

Last year, more than 72,000 people died from drug overdoses, according to estimates by the Centers for Disease Control and Prevention — there were 63,600 such deaths the prior year. In 2017, almost 49,000 of the overdose deaths were due to opioids, driven in part by a rise in the use of the synthetic opioid fentanyl.

But the number of deaths is only the most tragic evidence of the hold opioids have on America.

A 2017 NPR story examined how opioid abuse may be altering America’s job market, tightening the pool of available workers and causing many of those employed to take time off from work.

States, local governments and other entities have filed hundreds of lawsuits against drug makers and distributors, as a federal judge in Ohio seeks to reach an overall settlement between the companies and the plaintiffs from across the country.

Investors for Opioid Accountability is taking a different approach. They are demanding that the boards that run these companies make fundamental changes to their management practices as they address the risk to their reputation (risk management, it’s called in the trade) and the legal and financial ramifications of their practices. Beef up oversight. Appoint independent members to boards. Take a hard look at bonuses, present and past, that rewarded the largest amounts of drugs sold.

In spring of 2017, Meyer says, she began hearing from communities throughout the country that it was time to respond to the opioid crisis. One of those people was Tim Ingram, a health commissioner in Cincinnati. A member of one of Mercy Health’s regional boards, Ingram had been advocating for addressing the crisis since 2015 as he saw it run rampant through his community. Addressing the havoc wreaked by opioid use was part of the Mercy Health mission, and they needed to focus on it, he told his fellow board members.

By the time Meyer showed up in June 2017 at the annual Interfaith Center on Corporate Responsibilitymeeting in Grand Rapids, Michigan, she knew, she says, “the people we work for were concerned and impacted by this epidemic, and they wanted us to work on it.”

Give me a day, she told her boss. Let me see if I can find four or five other groups to collaborate with Mercy Investment Services. By the end of the afternoon, she recalls, she had heard from about 30 members of the interfaith center.

Soon she was approached by another policy and investment veteran with an interest in promoting corporate accountability — UAW Retiree Benefits Trust staff member Meredith Miller. The public policy expert had an idea: Why didn’t she and Meyer team up?

“The faith-based community has a long history in engaging health care companies on corporate governance issues and as such there is tremendous leadership and expertise that benefit the investor coalition’s members,” said Miller in an email.

In addition to Mercy Investment Services, Catholic members of the opioid accountability group include Catholic Health Care Initiatives, Mercy Health, the Benedictine Coalition for Responsible Investment and an assortment of women religious communities.

All of the faith-based investment groups active in the opioid coalition are also members of the Interfaith Center on Corporate Responsibility, said Meyer. Long an incubator for corporate reform activism, the interfaith center came into being during the infancy of the anti-apartheid movement of the early 1970s.

In the decades that followed, religious communities were the “foundation” of the interfaith center, says Nora Nash, a Sister of St. Francis of Philadelphia who heads the order’s Office of Corporate Responsibility and is famous for negotiating with CEOs and for her assertive but respectful approach to shareholder resolutions. (They average about 90 a year.) The sisters are members of the both the corporate responsibility group and the Investors for Opioid Accountability coalition.

“We deal with corporations all the time,” says Nash, and we try not to work in silos.” As Franciscan sisters, who model themselves on trying to live the Gospel as Francis did, “we believe that in this work we have a responsibility to speak the truth. We hope the corporations are listening.”

Secular partners have “brought great value to us,” says Judy Byron, an Adrian Dominican who directs the Northwest Coalition for Responsible Investment in Seattle and represents her group in both the interfaith responsibility group and opioid coalition. “In many cases they are larger shareholders and have resources. We need all hands on deck.”

Though Meyer and Miller talk at least once a day and enjoy a close working relationship, the faith-based communities’ “soft power” approach diverges from the more muscular one employed by some secular groups like labor.

Faith-based groups usually talk to a company before filing resolutions, she says: “They will tell you, ‘It’s just part of our values.’ ” Some secular groups, on the other hand, have told her that they have a target set of resolutions to file every year. “We’re working toward the same goals, but they have different means of approaching them. I think some of them have a more sophisticated, balanced way of doing shareholder engagement that we have tended to avoid. So I have learned a lot.”

While religious organizations can be full Interfaith Center for Corporate Responsibility members and secular groups are associates, Investors for Opioid Accountability members operate on an equal footing.

Working together, they use a diverse tool-kit of tactics to spur pharmaceutical companies to change. “We have to strategize and see which one works best for a company,” says Meyer. Sometimes they file resolutions, then engage in extended dialogues. If the dialogue is bearing fruit, they may choose to withdraw the resolution.

That’s what happened with Cardinal Health, one of the nation’s largest opioid makers.

In a sign that the coalition is being taken seriously, Cardinal Health formed an ad hoc board committee on opioid business risks. The company also agreed to provide investors with reports on board oversight of opioid distribution, said Meyer. In response, Mercy Investment Services withdrew its resolution.

Meyer is hopeful someone will show up at the next shareholder meeting in November in Dublin, Ohio, to thank Cardinal in person — or that she can be there herself.

Changing corporate culture is not something that happens overnight. Resolutions, Meyers says, need to be filed about five months in advance to be considered for a potential shareholder vote. But even that can be an advantage: “It gives you leverage. Companies want it off the ballot.”

Their work with Cardinal was the beginning of a string of successes, Miller says. “The IOA has submitted 35 resolutions at 11 public companies. Ten of these resolutions have received shareholder votes, including majority votes (of independent voters) at Assertio Therapeutics (formerly Depomed) and AmerisourceBergen.”

At various companies, shareholders have also requested and gotten independent board director reports on opioid risks and opioid-focused lobbying expenditures as well as governance reviews and “clawbacks” (cash or equities returned to the company) when there was individual misconduct, she says.

The long window between filing a resolution and showing up to a shareholder meeting allows for activists to launch negotiations with representatives from the drug makers and distributors already facing lawsuits and public blame.

But are these strategies singularly effective in forcing drug companies to change their behavior?

Experts contend that perhaps the most powerful role such coalitions can play, given that their financial clout in individual companies is necessarily limited, is to draw public attention and that of other stakeholders.

“They have more moral than economic control,” suggests Michael Pagano, a finance professor at the Villanova School of Business. “They are kind of like a gadfly on a horse or a bull, trying to enlist bigger animals to jump on the bandwagon” with them.

Corporations pay attention to faith-based groups “simply because we have been around so long,” agreed Seamus Finn, a member of the Missionary Oblates of Mary who chairs the corporate responsibility center’s board of directors. He noted that since the 1960s when Vatican II produced the document Gaudium et Spes, the Catholic Church has been called to look outward, toward the world.

The American bishops’ hallmark pastoral letter on the economy, “Economic Justice for All” (1986), points out that those who own material goods, whether they be property or stock, have responsibility to use them well, he said. That means that stockholders have an obligation to make responsible choices, he said.

Campaigning for corporate governance reform as minority shareholders may be as much about public relations and diplomacy as it is about financial impact.

“The real value of this endeavor is increasing public awareness and putting pressure on companies to do the right thing,” agrees Fr. Oliver Williams, a Congregation of Holy Cross priest and associate professor at the University of Notre Dame’s Mendoza College of Business and an expert in business ethics.

But the coalition is making an educated guess that even the most profit-oriented producers don’t want to be pegged as callous, conscienceless killers.

“I think they realize the risk to the long-term success of their companies if they only focus on the profit motive,” says Meyer. A decision to focus on profit alone (at the expense of people’s health) isn’t a strategy for long-term success and risks lasting damage to a company’s reputation, she explains.

As they take a 360-degree look at the industry, Meyer and Miller are expanding their ambitious “to-do” list.

Next year, says Miller, they intend to focus on retail pharmacies and fentanyl product producers.

“Our goal is to make change happen,” says Meyer, “not to file resolutions.”