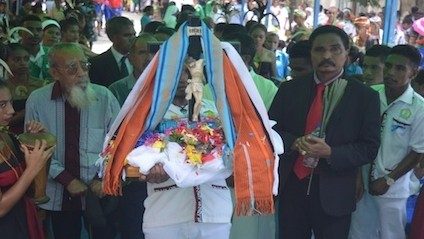 Young Catholics of Timor-Leste, or East Timor, have been reminded of their special role in maintaining peace in their country, especially in the run up to elections in May.  Celebrating a special Mass for youth people on Palm Sunday in the capital Dili on March 25, Bishop Virgilio do Carmo da Silva said that  young people should look up to the cross of Jesus as a source of inspiration in daily life.

Dioceses across the world mark World Youth Day (WYD) on Palm Sunday.   During the Mass in Dili, young people passed around the so-called “University Cross”.  The tradition began in 2013 with the image of crucified Jesus being passed from one university to another to be venerated by students.

“The presence of the cross at a university is not for public view or a decoration.  It symbolizes Christ as the bearer of light and peace,” Bishop Da Silva said during the Mass.

The 50-year old Salesian bishop urged young people to stay close to Christ’s cross and His resurrection which is the culmination of the Holy Week that starts with Palm Sunday.

Father Angelo Salsinha, president of Our Lady of Fatima Minor Seminary in Dili, said the idea of a cross being passed between universities has its origins in the World Youth Day Cross that stopped in Timor-Leste for three days on its way from Germany to Australia in 2007.

“By having a university cross and seeing it, young people can reflect on the meaning of Jesus’ suffering, which was to save all people,” Father Salsinha said.

Bishop Da Silva also called on young people to maintain peace, particularly as the country prepares for elections on May 12.

After its Portuguese colonizers left in 1975, East Timor was invaded by Indonesia.  It  gained independence in 2002 after a UN-sponsored referendum.  Since then, Asia youngest democracy has been through bouts of violence and political instability.

In 2006, it was racked by violence when rivalries among political elites led to open conflict between factions within the security forces and breakdown in law and order.

Elections in July 2017 produced no clear winner, resulting in a hung parliament.  Fighting among lawmakers has paralyzed the former Portuguese colony.  President Francisco Guterres dissolved parliament in January, making way for fresh elections on May 12.

About 97 percent (some 1.26 million) of East Timor’s  1.3 million are Catholics, making it the ‎most Catholic nation in Asia.  But in absolute numbers, the Philippines has the largest Catholic population in the continent, with nearly 81 percent of its estimated 104 million people owing allegiance to the Pope of Rome.   (Source: UCANEWS)