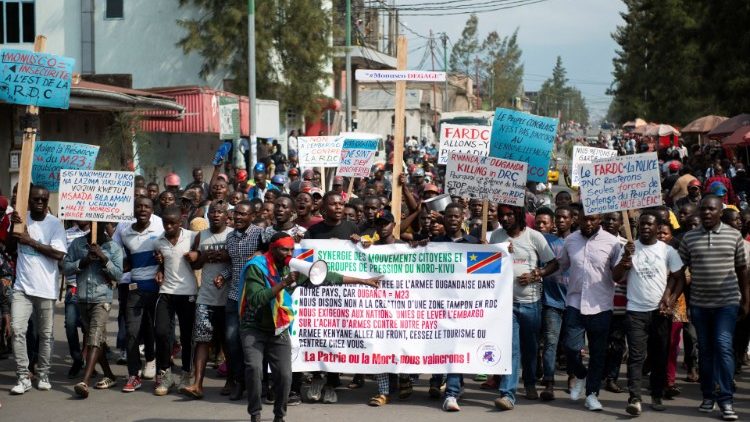 A national day of peaceful marches sponsored by the Bishops’ Conference was held on December 4 in the Democratic Republic of Congo to protest against the ongoing violence and foreign interference in the eastern provinces of the African nation.

Thousands of demonstrators joined several peaceful marches in the Democratic Republic of Congo (DRC) on Sunday to protest against the increasing violence and insecurity in its Eastern provinces of North Kivu and Ituri, rich of mineral resources attracting foreign interests.

The marches were called by the local Catholic Bishops’ Conference (CENCO) after an extraordinary General Assembly in early November. In the final statement the bishops expressed their concern over the violence targeting civilians in the North Kivu and Ituri provinces, warning  against the “balkanization” of the country and calling on Congolese citizens “to stand up to safeguard its territorial integrity. “

No to the “balkanization” of the DRC

“Every Congolese citizen who loves his country and is touched by the suffering of his people must rise up to oppose the project of balkanization of the DRC”, Cardinal Ambongo Besungu of Kinshasa reiterated in a message addressed to the demonstrators, in which he explained that the the initiative had no political purposes, but was aimed  at showing “the whole world that we are one people united for the national cause, united for the unity and sovereignty of our country but also for the dignity of our people”.

For nearly three decades, the North Kivu and Ituri provinces have been marred by violence which the UN peacekeepers of the MONUSCO haven’t managed to stem, adding to the frustration of the population.

Congolese authorities are blaming  Rwanda and Uganda for sponsoring rebel movements in these areas, namely the terrorist movement 23 March (M23), and of using them to steal the country’s minerals. Rwandan President Paul Kagame has always denied these accusations, and tensions between Kigali and Kinshasa are running high.

Ineffective action by the international community

The Congolese bishops have joined the accusations and have also voiced strong criticism against the international community, including the UN and the European Union, for standing by as massacres in eastern Congo continue.

The EU has been further criticized by many quarters after the European Parliament adopted a controversial assistance measure worth €20 million last week to support the continued deployment of Rwanda military forces in Mozambique’s Cabo Delgado to fight islamist militias operating in that  province..

The current crisis  broke out  a year ago when the  M23 militants conquered large parts of North Kivu, and Ugandan troops were deployed to the province to fight the the Ugandan rebel group Allied Democratic Forces.  The group has been perpetrating   massacres against civilians, the latest of which occurred on 29 November in the village of Kishishe, about 70 kilometres from North Kivu’s capital Goma.

Pope Francis’ visit to the DRC

Due to the ongoing insecurity in eastern Congo,  during his Apostolic Journey to the African nation from  January 31-February 3 2023, Pope Francis will not visit Goma to meet with the victims of the violence as originally planned. Instead, he will meet them  in the nuntiature in Kinshasa on February 1.