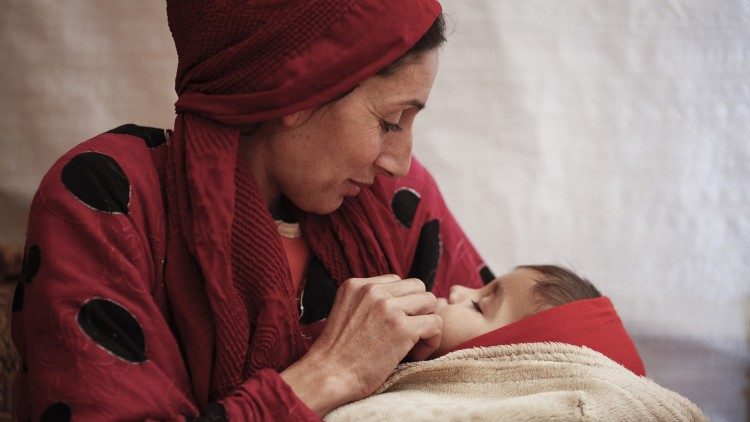 A reading of the Gospel to understand the present time, according to the words of Pope Francis, following in the footsteps of the most recent Council: this is the time of mercy, even if men and women of today – as St John Paul II affirmed – seem opposed to this word.

This year marks the twentieth anniversary of the canonization of St Faustina Kowalska, the apostle of Divine Mercy; and the fortieth anniversary of the encyclical Dives in misericorida. Pope John Paul II prophetically walked the path of mercy, “following,” as he writes in that document, “the doctrine of the Second Vatican Council,” and impelled, “in these critical and difficult times,” by the need to discover “once again in Christ to the countenance of the ‘Father of mercies and God of all comfort’.”

For this reason, he continues, “it is now fitting to reflect on this mystery. It is called for by the varied experiences of the Church and of contemporary man. It is also demanded by the pleas of many human hearts, their sufferings and hopes, their anxieties and expectations.”

John Paul II: Men and women of today seem opposed to a God of mercy

In that encyclical, St John Paul II launched “a heartfelt appeal” that the Church might make the mercy of God ever better known. It is a mercy, he writes, “which humanity and the modern world need so much. And they need mercy even though they often do not realize it.” In fact, “the present-day mentality, more perhaps than that of people in the past, seems opposed to a God of mercy, and in fact tends to exclude from life and to remove from the human heart the very idea of mercy.”

Pope Francis: It is the time of mercy

Pope Francis, following in the footsteps of the Second Vatican II and of his predecessors, forcefully affirmed “This is a time of mercy” (Apostolic Letter Misericordia et misera, 2016).

It is a proclamation proclaimed with passion, which fills the hearts of many people with joy, but does not fail to arouse in some, even within the Church, doubts and perplexity, if not open hostility. We find ourselves in the same situation described by the Gospel two thousand years ago: “mercy” becomes a “nice” but empty word for those who feel they have no need of it; a word that is inimical to so much of our “justice” that knows only how to accuse and condemn in a summary fashion. The justice of God, on the other hand, saves.

Benedict XVI: Mercy is the nucleus of the Gospel

For Benedict XVI, “mercy is the central nucleus of the Gospel message; it is the very name of God, the Face with which he revealed himself in the Old Covenant and fully in Jesus Christ, the incarnation of creative and redemptive Love” (Regina Caeli, 30 March 2008).

The evangelists tell us that the first to oppose Jesus were the scribes and Pharisees, who could not bear to see Jesus behaving mercifully toward even the most notorious and despised sinners, while treating so harshly those who considered themselves to be just, to be true observers and defenders of the Law handed down by the fathers – who themselves had, nonetheless, already spoken of the “merciful and gracious” God (Ex 34:6).

But they could only see God as a judge and chastiser of sinners, the others; and they accused Jesus of transgressing the Law, of blaspheming, and even of being a demoniac. Their rage is understandable: they believed they were righteous, and felt they were being harshly criticised. They thought they were defending God, and God corrected them with hard words.

Jesus’ harshness towards the scribes and Pharisees

The harshest words were the seven maledictions hurled by Jesus at the scribes and Pharisees. We read in the Gospel of Matthew:

When the scribes and Pharisees asked Him why His disciples transgressed the tradition of the ancients, Jesus answered:

“Why do you transgress the commandment of God for the sake of your tradition?… So, for the sake of your tradition, you have made void the word of God. You hypocrites! Well did Isaiah prophesy of you, when he said: ‘This people honours me with their lips, but their heart is far from me; in vain do they worship me, teaching as doctrines the precepts of men’ (Mt 15: 3, 6-9).”

Not those who say, “Lord, Lord”

The words that Jesus promises to address to some who consider themselves believers are also disconcerting:

“I desire mercy, and not sacrifice”

At that time, very detailed religious norms had accumulated, which could provide security, but had lost what was essential. Jesus, who was criticized by the Pharisees because he ate with publicans and sinners, says:

“Those who are well have no need of a physician, but those who are sick. Go and learn what this means, ‘I desire mercy, and not sacrifice.’ For I came not to call the righteous, but sinners” (Mt 9:12-13).

The essence of Christianity

The Pharisees were accustomed to asking Jesus trick questions, so He would have to answer yes or no, with His back against the wall. Other times they would simply test Him. To one of them, who had asked about the greatest commandment of the law, Jesus clearly revealed that the essence of Christianity is charity:

The questions of the final judgment

We know that we will be judged on love, and we already know the questions for the examination of the final judgment. They are the works of mercy:

“When the Son of Man comes in His glory, and all the angels with Him, then He will sit on His glorious throne. Before Him will be gathered all the nations, and He will separate them one from another as a shepherd separates the sheep from the goats, and He will place the sheep at His right hand, but the goats at the left. Then the King will say to those at His right hand, ‘Come, O blessed of My Father, inherit the kingdom prepared for you from the foundation of the world; for I was hungry and you gave Me food, I was thirsty and you gave Me drink, I was a stranger and you welcomed Me, I was naked and you clothed Me, I was sick and you visited Me, I was in prison and you came to Me’” (Mt 25: 31-36).

“Distant” examples of charity for “neighbours”

Our perennial temptation is to “cage” Jesus in our own schemes; but He goes beyond them, as the parable of the Good Samaritan (Lk 25: 10-37) reminds us: A man considered a heretic performs an act of charity, unlike the priest and the Levite who see a man left half dead by bandits, but do not intervene. The Samaritan, on the other hand, has compassion, he stops and cares for that man.

God’s judgment is different from our judgements.

Jesus has words of greater esteem for two apparently distant people, who approach Him not for themselves, but for the healing of a daughter and a servant. To the Canaanite woman, He says: “O woman, great is your faith!” (Mt 15:28). And to the centurion, He says, “Truly, I say to you, not even in Israel have I found such faith” (Mt 8:10). Love overcomes all barriers and labels.

The humility to accept correction

No one likes to be called a Pharisee. But inside each of us there is a “doctor of the law” who judges our neighbour and thinks himself better than the publican on duty, as the famous parable (Lk 18:9-14) tells us: We need to be corrected, sometimes even to be strongly shaken in our harshness.

Reading the signs of the times

With the latest Council, the Church has continued her journey in understanding the truth of God’s mercy.