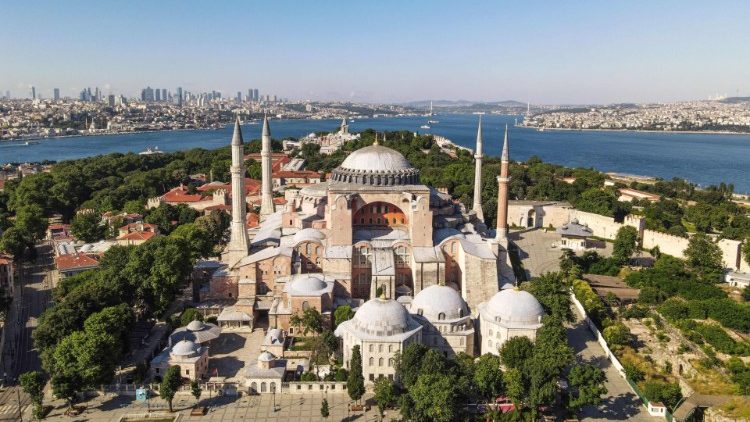 Turkish President Recep Tayyip Erdogan decrees that the Basilica of Hagia Sophia will become a mosque once again, following a ruling from the Council of State.

Turkish President Recep Tayyip Erdogan issued a decree on Friday ordering the historic Hagia Sophia to be opened for Muslim prayers as of 24 July.

The decree followed a ruling from Turkey’s top administrative court which revoked Hagia Sophia’s status as a museum, saying the ancient building’s conversion was illegal.

Since 1934, the building has been a living example of religious harmony in the form of stone. In recent years it has become the most popular tourist attraction in Turkey, drawing over 3.5 million visitors during 2019.

Hagia Sophia was built by the Byzantine Christian Emperor Justinian in 537 and dedicated to Divine Wisdom.

After the Ottoman conquest of Constantinople in 1453, the basilica was converted into a mosque and the city renamed Istanbul.

In 1934, Mustafa Kemal Ataturk, the founding father of the Republic of Turkey, turned Hagia Sophia into a museum, which later became a UNESCO world heritage site.

Reacting to the basilica’s conversion back to a mosque, the Eastern Orthodox Ecumenical Patriarch Bartholomew I of Constantinople lamented the decision. He said Hagia Sophia belongs not only to those who own it at the moment but to all humanity.

“The Turkish people have the great responsibility and honour to make the universality of this wonderful monument shine,” he said, adding that as a museum it serves as a “symbolic place of encounter, dialogue, solidarity and mutual understanding between Christianity and Islam.”

Bartholomew, the spiritual leader of 300 million Orthodox Christians, further warned conversation would “push millions of Christians around the world against Islam.”

Earlier in the week, the head of the Russian Orthodox Church Patriarch Kirill also expressed concerns that turning Hagia Sophia into a mosque was a threat to Christianity.

“The concerns expressed by millions of Christians were not listened to,” he said.

For their part, UNESCO said that the building is inscribed on its world heritage list as a museum, which binds the Turkish state to ensure that “no modification is made to the outstanding universal value of the property.”

Over in Athens, the Greek Prime Minister said the conversion would be an affront to its ecumenical character.

“Furthermore, it is a decision that offends all those who recognize Hagia Sophia as an indispensable part of world cultural heritage,” Kyriakos Mitsotakis said.

“This decision clearly affects not only Turkey’s relations with Greece, but also its relations with the European Union, UNESCO, and the world community as a whole. It is a truly regretful development that the Turkish leadership, after working for the Alliance of Civilizations in 2005, has now taken the decision to reverse course.”

“The ruling by the Turkish Council of State to overturn one of modern Turkey’s landmark decisions and President Erdogan’s decision to place the monument under the management of the Religious Affairs Presidency is regrettable,” Borrell said.

Turkish President Erdogan defended the decision, saying all criticism is “an attack against our independence.”

He said Turkey had exercised its sovereign right to convert Hagia Sophia back to a mosque.