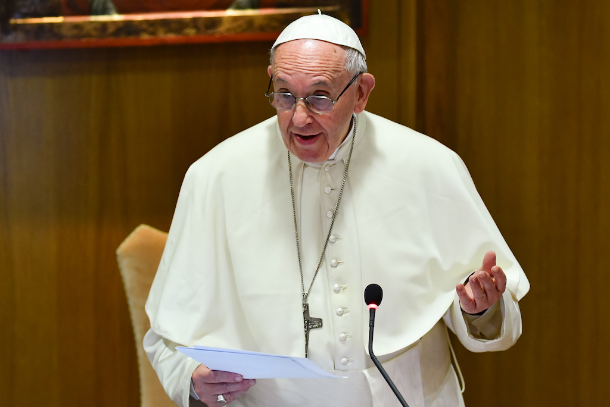 Even the greatest sinners can find a loving mother in Mary while those who are corrupt find refuge only in their own blind and selfish desires, Pope Francis said.In a book that was scheduled to be released Oct. 10 in Italian, the pope said Mary is unable to enter the hearts of corrupt men and women because they have made the “satanic” choice of “locking the door from the inside.””Mary cannot be the mother of the corrupt because the corrupt would sell their own mother, they would sell their belongings to a family, to a people,” the pope said. “They look for their own profit, whether it’s economic, intellectual, political, of any kind.”The book, titled “Ave Maria” (“Hail Mary”), features reflections on the Marian prayer made by Pope Francis during an interview with Father Marco Pozza, a prison chaplain in the northern Italian city of Padova.Several excerpts of the new book were published Oct. 8 by Vatican Insider, the online news supplement to the Italian newspaper La Stampa.The pope said he imagined that throughout Mary’s life, she remained a “normal woman” despite the extraordinary circumstances of being the mother of God, and “she is a woman that any woman from this world can imitate.””Mary was normal. She worked, she did grocery shopping, helped her son, helped her husband: normal,” he said. “Normality is living with the people and like the people. It is abnormal to live without roots within a people, without a connection to a historical people.”Without those connections, the pope said, a sin can arise that “Satan, our enemy, likes so much: the sin of the elite.””The elite do not know what it means to live among the people. And when I speak of elite, I do not mean a social class: I speak of an attitude of the soul,” he said. “One can belong to a church of the elite. But, as the (Second Vatican) Council said in ‘Lumen Gentium,’ the church is the holy faithful people of God. The church is a people, the people of God. And the devil loves the elite.”But those who recognize their sins can experience Mary’s motherly protection because she “is mother of all of us sinners, from the greatest to the least holy.””That is the reality,” the pope said. “If I told myself that I wasn’t a sinner, I would be the greatest corrupt person.”Pope Francis also reflected on Mary’s suffering at seeing her son’s death, which is a pain that many mothers, especially in his native Argentina, experience today.He recalled the pain endured by the “Madres de la Plaza de Mayo,” (Mothers of the Plaza de Mayo), an association of mothers searching for their children who went missing during Argentina’s so-called “dirty war.” As many as 30,000 Argentines were kidnapped, tortured, murdered or disappeared between 1976 and 1983 under Argentina’s military dictatorship, and many of those detained were seized along with their children.Their pain, Pope Francis said, “is impossible to understand.””One of them told me, ‘I want to at least see the body, the bones of my daughter, to know where she is buried,'” he recalled. “There exists a memory that I call, ‘maternal memory,’ something physical, the memory of flesh and bone. This memory as well can explain the anguish.”