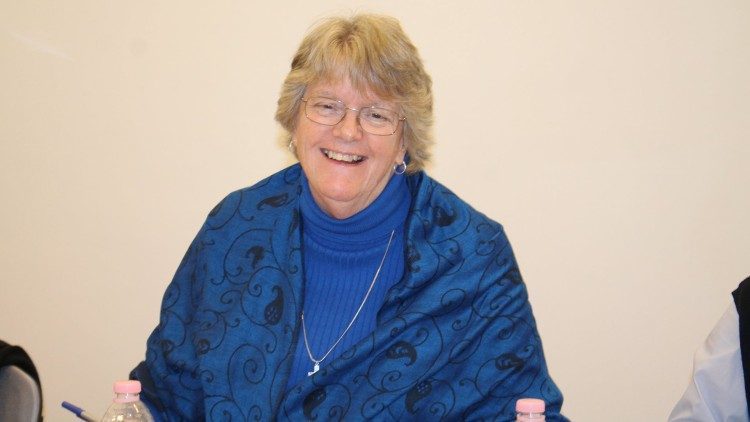 One of the women religious who audited the Synod of Bishops on Young People is Sr Sally Marie Hodgdon, the Superior General of the Sisters of St Joseph of Chambéry. She represented the International Union of Superiors General in her capacity as its vice-president. She spoke with Sr Bernadette Reis about what it was like for her as a woman religious to participate in the Synod.

Sr Sally began saying that the Synod provided a “moment of conversion” for her. It helped her realize that she is not “as open to my young sisters or candidates as I could be”.

Seeing how the Vatican works was a “moment of grace”, Sr Sally continued, because she was able to see it in a “different light”. She was “pleasantly surprised” by some of the processes used in the Synod, one of them being the brief period of reflection introduced by Pope Francis after each intervention.

“It gave the sense of more of a prayerful processing of information. This made a big difference. It’s very difficult to sit and listen to 370 interventions over the course of so many weeks. Having that moment of quiet and a beautiful scenery to look at on the screen really did help us to pause.”

Sr Sally then described what it was like in her small group. “I could see conversion happening” among the Cardinals and bishops, she said.

“I could see their openness to our questions, to our modifications or amendments. The young people spoke often, as did I, as did the men from USG [Union of Superiors General, the male counterpart to the UISG], as did the priest from the Migrants and Refugees Section. We spoke as much as the Bishops and Cardinals, or more so, actually, than some of them.”

Even though she and others in the small group could not vote, or formally present modifications, Sr Sally said that their suggestions were welcomed nonetheless. One of the Bishops in her group submitted some of the suggestions that came up.

“We worked as a network. That was very good for me as a woman religious to see. Because initially I thought, this is not very inviting to have us there but not able to submit amendments, or there and not able to speak freely. We all spoke very freely.”

Moments of being together with young people

Pope Francis contributed his own charisma to the Synod, Sr Sally said.

“Pope Francis is such a grace for our Church. He’s so open, he’s so welcoming, he’s so humble. And he brought that side out in all of us. There in person, he was able to bring us together with the youth and to bring the best out in us.”

The youth sitting directly behind the women religious “were hootin’ and hollering”, Sr Sally interjected here.

“I watched the faces of the Bishops and Cardinals. And the first time, they were like, ‘Hmmm. This is different’. But after that, they loved it!”.

“In the end, it was a very welcoming atmosphere”, Sr Sally said. The difference made by the women religious auditors was their presence in the small groups and what they shared during informal discussions, she said.

“There were only 7 women religious there, … but we made a huge impact on the Synod. We know that based on what people have told us. Last night when we were leaving, the Bishops and Cardinals were saying, “Thank you for being there. You really are the ‘Madri Sinodali’ [Synod Mothers]. That meant a lot to us because we knew our voices were heard.”