Sudan: A Church rooted in the Gospel and two famous saints 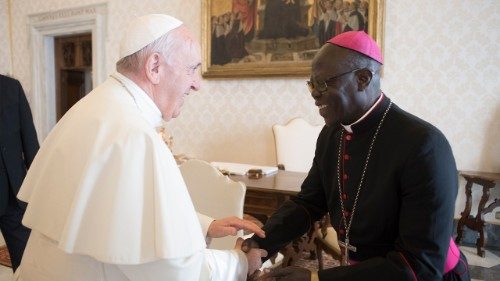 We hear much more about the Church in South Sudan and less about its northern neighbour, the Republic of Sudan. What is it like to be a Christian and a Catholic in this predominantly Muslim country? Vatican News spoke to the Archbishop of Khartoum, Michael Didi Adgum Mangoria.

“In every centre, every place (in Sudan) we do not conclude prayer without saying, ‘Saint Bakhita pray for us, Saint Comboni pray for us’.” This is the assertion of the Archbishop of Khartoum, Michael Didi Adgum Mangoria, in the Vatican recently. The Sudanese prelate was referring to two beloved saints venerated by Catholics throughout the world.

The two saints are Sudan’s gift to the universal Church: St. Josephine Bakhita is the patron saint of Sudan and of human trafficking survivors. Born in Darfur, Sudan, her feast day is 8 February.

Saint Daniel Comboni, an Italian, founded the Comboni Missionaries. Comboni, who had a strong connection with Sudan, also had a grand vision for Africa in general. At the time it was uncommon to speak about Africa in the manner he did. His vision for Africa is captured in his motto, “Save Africa with Africa.” Comboni’s feast day is 10 October.

In our time, we hear much more about the Church in South Sudan and less about the Church in the Republic of Sudan. What is it like to be a Christian and a Catholic in this predominantly Muslim country? Speaking to Vatican News, Archbishop Didi Adgum Mangoria acknowledged the strong faith of Christians in his country and, in general, is happy about the peaceful co-existence with Muslims. He nevertheless concedes that there are challenges.

Poverty among Christians in Sudan is the biggest challenge

“We had a good presence of Christians before 2005 in the northern part of Sudan but after the division of the country in 2011 we became quite a minority here in…the Republic of Sudan. But then, in the South when the war began in 2013 many people came (back) from the South –actually more than before,” Archbishop Mangoria said.

The biggest challenge facing Christians in the Republic of Sudan is that of poverty. Many of the Christians are people from the rural areas of Sudan. Most come to the big towns or to Khartoum fleeing endemic armed conflicts such as the fighting in the Nuba mountains. Once they arrrive in the cities, away from an agrarian environment they know best, life becomes particularly harsh as they try to eke a living off buying and selling in the markets.

From a pastoral point of view, the Church has few local priests. It is also complicated to get work and resident permits for missionaries who wish to serve in Sudan. Sometimes it is just as challenging to renew existing permits when they expire.

Asked if Christians are allowed to practice their faith freely, Archbishop Mangoria was full of praise for ordinary Sudanese people whom he described as a good and hospitable. Nevertheless, although Sudan’s authorities repeatedly deny discrimination against Christians some of the laws promulgated appear targeted at Christians.

A sore case in point, among Christians, is the declaration by the Minister of Education in the state of Khartoum, last year, proclaiming Saturday as an extra holy day or a day of obligation. For almost 100 years, Christians observed Fridays and Sundays as days of obligation. The addition of Saturday, in the state of Khartoum, effectively means that Church institutions and schools now only operate on a week of four days. To many Christians, this feels very discriminatory.