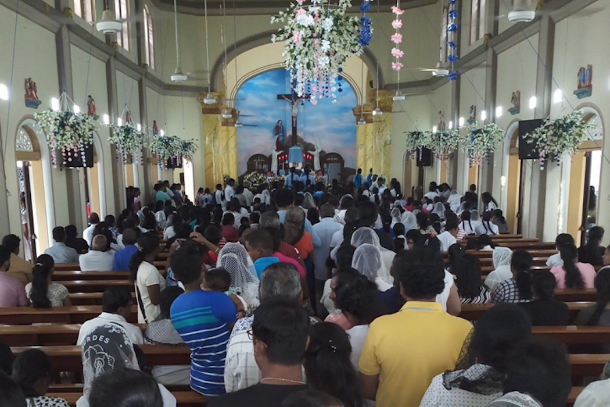 Ayoma Mary Fernando recently prayed in front of the relic a wooden cross said to have been planted in Sri Lankan soil in the 17th century by the missionary priest St. Joseph Vaz.The relic was on display in Negombo on Sri Lanka’s west coast and Fernando is a member of the Legion of Mary, an international voluntary lay Catholic association.Fernando said St. Vaz had not drawn distinctions between people based on their social status, race or creed.”St. Vaz’s exemplarily life inspires the local and universal church today,” Fernando said.”Catholics should promote his life, work and courage. He should be venerated by the country’s entire population.”

St. Vaz, who was born in Goa, India, in 1651 and died in 1711, was an Oratorian priest and missionary in Sri Lanka when Dutch forces were occupying coastal areas and imposing Calvinism after taking over from the Portuguese.Despite the repression, he braved a smallpox epidemic and secretly helped Sri Lankan Catholics to retain their faith.St. Vaz was canonized by Pope Francis in 2015.Mary Fernando wore a black veil when paying her respects, along with other faithful, to the relic of the cross.”The Indian missioner dedicated his life for Sri Lankan Catholics and we follow him to go forth with the same courage and zeal,” she said.”There is a Catholic population here today because of his great love for us.”When St. Vaz arrived in Sri Lanka in 1687, he saw that Catholic churches had been destroyed and the faithful dispersed.He walked hundreds of kilometers disguised as a beggar because of the religious persecution at that time and had secret meetings at night with Catholics.A wooden cross, said to have been planted by St. Vaz in Sri Lanka, is normally kept at Maha Galgamuwa, in Kurunegala Diocese, where the saint is believed to have preached.But the Catholic Bishops’ Conference decided to take the cross to 12 dioceses from the beginning of September this year.The church in Sri Lanka declared 2017 as the year of St. Vaz focusing on poverty alleviation, and the spreading of harmony among different religions and ethnic groups.Parishes and Catholic schools conducted special prayer services and distributed free meals for children.From Oct. 11 to 29 the cross has been assigned to Anuradhapura, Batticaloa, Trincomalee, Jaffna and Mannar dioceses.Joseph Mallawa, a Sunday school teacher, said St. Vaz was known for his compassion and embracing of different cultures and is an example for modern-day reconciliation in Sri Lanka. He was referring to the nation’s bloody 1983-2009 civil war between largely Buddhist Sinhalese and mainly Hindu ethnic Tamils.”St. Vaz spoke both local languages and lived peacefully,” Mallawa said.”We should live peacefully with other ethnic groups and work in cooperation with them.” Bishop Vianney Fernando, chairman of the National Secretariat, said the relic of the cross being carried island-wide could help combat materialism and provide inspiration for the solving of national problems