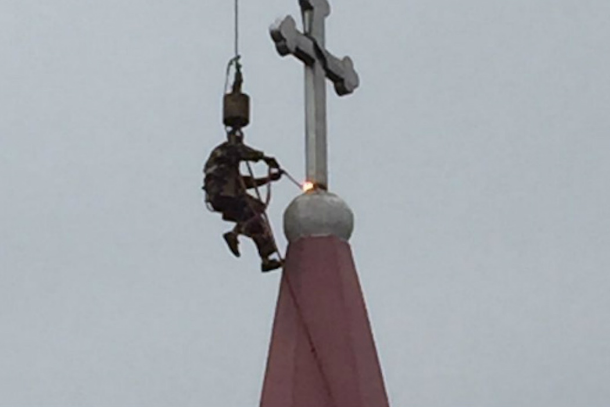 Chinese officials have ordered the demolition of more crosses and some other church structures less than a month after a landmark deal was signed between the Vatican and the country’s communist regime.The provisional agreement, covering issues such as the appointment of new bishops, was supposed to improve historically tense, at times hostile, relations.But within dioceses in Zhejiang, Henan and Guizhou provinces, there has been a new campaign to remove public symbols of Christianity.In southwestern Guizhou, officials Oct. 15 issued an order to the Anlong Church to remove structures and crosses, said to be in violation of planning laws, that were erected as part of a local pilgrimage.Unless a fine was paid by Oct. 20, income obtained from the pilgrimage would be confiscated, authorities warned

On Oct. 12, two crosses cross of the Luoyang Catholic Church in Henan province was demolished by authorities at 2 am.A video clip circulated showing a female church member picking up a stick to hit an official vehicle in a bid to block the demolition.Another clip showed a woman crying at the scene (see further below).In the same province Oct. 3, a church in Hamadan diocese had a cross forcibly removed.A senior provincial official had previously stated that action was required as the cross was too obviously visible from a nearby train station.On Oct. 11, the cross on a bell tower and a wall of a Church in Wenzhou City of Zhejiang province were demolished by 40 workers dispatched by local communist officials.

The cross of Lingkun St. Michael Church of Yongqiang Parish in Wenzhou was demolished on Oct. 11 by people sent by the authorities. (Photo supplied) A source, on condition of anonymity, told ucanews.com that officials determined that, as three local Christian churches already had crosses removed, the Catholic Church should not be exempted.John, a Catholic of China’s so-called ‘open church’, rather than what is known as the ‘underground church’, said it was depressing that such problems persisted despite the recent provisional agreement on relations between the Chinese government and the Vatican.He feared that the removal of crosses was only the start of a wider agenda to remove all externally displayed church symbols.”That is Christianity is in conformity with Sinicization, in other words, in line with socialism,” John said