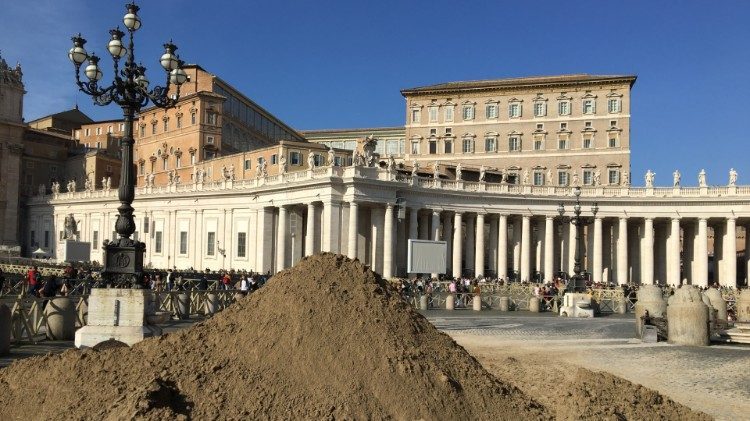 Share
Some of the 700 tons of sand required to make “Jesolo Sand Nativity” has already arrived, as work begins to prepare St. Peter’s Square for this year’s Christmas celebration.

From Venice to Rome

In 2017, the Mayor of Jesolo in Venice, Italy, presented an ambitious idea to the Patriarch of Venice: to bring the “Jesolo Sand Nativity” scene all the way to Rome. Now, one year later, work is underway to build this immense crèche. In the weeks to come, more sand will be brought into the square and pressed into boxes, from which a great pyramid will be erected. Later, four sculptors from around the globe will arrive in the Vatican to bring the sand to life.

The project has already been realised in the Italian town of Jesolo since 2002, and in the past it has incorporated themes of relevance to contemporary society.

It was during the Pontificate of Pope St. John Paul II that the tradition of erecting a Christmas tree and a life-size nativity scene began. The first installation was created in 1982, and since that time it has become an honour for cities and sculptors alike to provide the Vatican with their Christmas decorations.

This year, the Christmas tree is a spruce from the forests of Pordenone in Italy, donated by the provincial authorities there. Both the donators of the Christmas tree and the people behind the “Sand Nativity” project will be received in an audience with the Holy Father prior to the inauguration on 7 December.

After which the many people visiting the Vatican will experience a beautifully decorated Christmas tree and the largest sand nativity scene in Christendom, right next to the largest Catholic Church in the world.

Victim counselor to US Bishops: Children have been betrayed

Bishop Zziwa is the new Chair of the Uganda Episcopal Conference