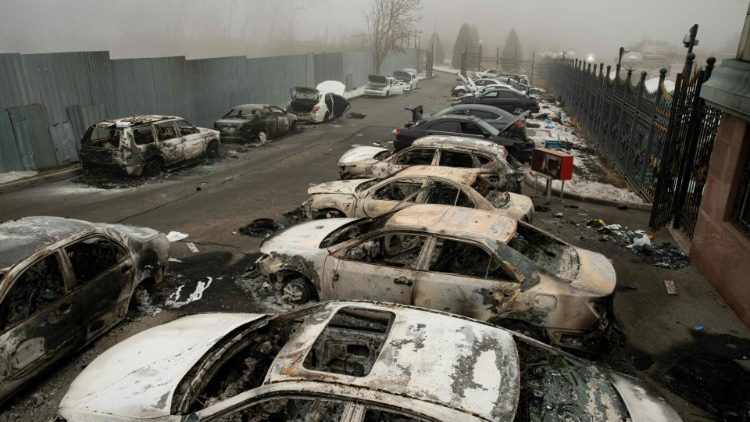 A Russian-led military alliance is dispatching peacekeepers to Kazakhstan after the country’s president asked for help in controlling anti-government protests, which have escalated into deadly violence.

But security forces responded harshly, with a police spokesperson saying that dozens of attackers were in her words “liquidated”.

Authorities also say that a least a dozen police officers were killed in the unrest, and hundreds of people were injured.

One police officer was reportedly found beheaded, amid signs that the escalating clashes pose a growing challenge to authoritarian rule in the Central Asian nation.

The airports in Almaty and two other cities have been shut. In addition, internet service was severely interrupted for the second day on Thursday, blocking access to Kazakh news sites.

The protests were initially sparked by a New Year’s Day near-doubling prices for a type of liquefied gas widely used as vehicle fuel in the oil-producing country.

However, the protests increasingly reflect wider discontent in a country that the same party has ruled since gaining independence from the Soviet Union in 1991.

Kazakhstan President Kassym-Jomart Tokayev pledged to quell the unrest, which he blamed on “terrorist bands,” and asked a Russia-led military alliance for help. “Calls to attack civilian and military offices are completely illegal,” President Tokayev said.

And he added: “It is a crime that will be punished. Power will not fall. What we need is not conflict but mutual trust and dialogue.” Amid the turmoil, Tokayev fired his predecessor Nursultan Nazarbayev as head of the country’s security council and accepted the government’s resignation.

It seemed a fall from grace for Nazarbayev, who ruled his nation with an iron fist for nearly three decades and whose family controls much of Kazakhstan’s economy.

The new interim head of government, Alikhan Smayilov, and the new State Secretary, Erlan Karin, are seen as part of a new generation of well-educated technocrats. But they, too, failed to halt the unrest.

Yet protestors show no intention of ending their frustration over authoritarian leaders. “The time has come together under one banner,” a man shouted, applauded by crowds. “So, let’s go Kazakhs.”

For now, protests continue despite a crackdown in the Muslim-majority country of nearly 20 million people.

Pope: Church needs entrepreneurs with “the smell of the sheep”