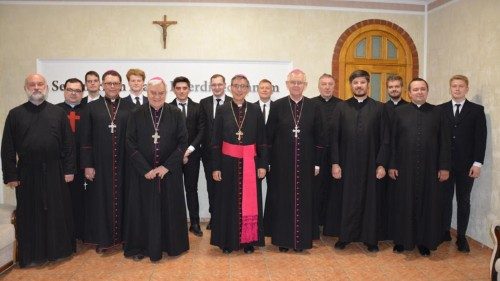 The mentality of the people of Kazakhstan is slowly changing regarding stereotypes about the religious affiliation of the country’s individual ethnic groups, says Fr. Ruslan Rakhimberlinov, the first Kazakh rector of Central Asia’s only seminary, in Karaganda, as he shares his joy for the grace of Pope Francis’ upcoming Apostolic Visit to the nation.

“I am a priest who comes from this nation, from this nationality, because my father’s name is Kazakh and my mother comes from the Ukraine – but we Kazakhs always count nationality by father, so I feel and consider myself a Kazakh,” says Fr. Ruslan Rakhimberlinov from Karaganda, Kazakhstan, as he anticipates Pope Francis’ arrival in Nur-Sultan on Tuesday.

Fr. Ruslan, 39 years old, was recently appointed as the new rector of Kazakhstan’s Catholic Theological Seminary, the only Catholic seminary in Central Asia, and the first-ever ethnically Kazakh rector to run it.

“For us, the visit of Pope Francis to Kazakhstan is an opportunity for our small Catholic community here, our ‘small flock’ in Kazakhstan, to gain some momentum.”

He had been baptized in the Catholic Church just two years prior to Pope St. John Paul II’s visit to Kazakhstan in 2001.

Pope Francis’ visit is the second time a Pope has visited “our Church” in these years since Kazakhstan’s independence, which, says Fr. Ruslan, “is a double joy for our seminary community.”

“In the 20 years of our existence in Kazakhstan, we are the only seminary in Central Asia, and we are very happy that God is giving us this grace.”

First Kazakh priest in the country

Also noteworthy is that Fr. Ruslan is the first Kazakh priest in the country. “I was introduced to the Catholic Church when I was about 15 years old,” he says.

“I come from a simple family. My father is a formal believer of Islamic religion, and my mother is Orthodox, of the Russian Orthodox Church – you could say the Soviet Union. The time of atheism had kind of taken its toll. It was all formal….”

Two years later, feeling called to a vocation, and encouraged by his friend, relatives, and the priest serving as rector, Fr. Ruslan decided to enter the seminary in Karaganda.

In 2008, after years of formation, he was ordained a priest at the celebration of the Feast of Saints Peter and Paul on June 29.

All these years, he served as a priest in various parishes of Kazakhstan, especially in the Karaganda Diocese.

With his baptism and ordination to the priesthood, he suggests he challenged long-standing prejudices that have been rather widespread in Kazakhstan, and which have often fueled mistrust between different religious communities.

“Of course, there are also difficulties, because people have such prejudices that if you are Kazakh, you should always be a Muslim. If you’re Russian, you must be Orthodox, and if you’re Polish or German, you must be Catholic. I often encounter such conversations, or maybe even accusations: ‘What are you doing there? You’re a Kazakh, and you’re supposed to go according to the faith of your ancestors!”

Fr. Ruslan, however, is grateful to see this mentality slowly changing.

“Today, people give more respect to a person’s free choice, and many understand my choice, even my relatives.”

Need to recognize the Gospel in Kazakhstan

“For me it is also a responsibility: it is very important to me that the Gospel, the faith of Christ and Christianity here in Kazakhstan, where it already has its deep roots, be recognized. That people gradually learn what Christianity is, what the Good News is, who Christ the Lord is, and what the Catholic Church is.”

Pope Francis, he goes on to explain, will find in Kazakhstan, “a Church that is familiar with the idea of synodality and puts it into practice,” because “we all realise here that the community of Catholics in Kazakhstan is a small flock.”

“We are few in number, so we priests, and also men and women religious know that our future, as a Church, does not depend only on priests and deacons. It is very important for us that the laity, that is, our faithful, understand very well what their responsibility is for the Church in Kazakhstan, the Church of the future.”

To prepare for the Pope’s visit, the seminary is preparing itself spiritually, with some prayer groups and meetings in parishes, especially considering Pope Francis’ teaching.

Fr. Ruslan expresses particular appreciation for Pope Francis’ latest encyclical, Fratelli tutti, saying, “we are very close to dialogue among all our brothers, because in Kazakhstan so many different religions are represented.”

“We are preparing for this visit to give us impetus for a richer dialogue, and not only for us Catholics, but also for our Orthodox brothers, for our Muslim brothers, because the Muslim presence in Kazakhstan is very great.”

The seminarians, the rector relayed, cannot wait for their personal meeting with Pope Francis on 15 September, where they will have “a unique opportunity – for many of them maybe the only one in their lives – to meet face to face with Pope Francis of Rome.”

Speaking about the seminary in Karaganda as the only Catholic seminary in all of Central Asia, he told Vatican News about its future priests.

“We can say our seminary is ‘enriched’ with an intercultural, interethnic aspect. The future seminarians come from Uzbekistan, Russia, Georgia, and of course, Kazakhstan. We have 10 students in total.”

Each seminarian, he says, carries a particle of the culture and people they come from; “there is this enrichment: everyone shares something”. This “grace” and “wealth,” he said, helps the seminarians.

Grace of God, embracing with faith

While he recognizes that some difficulties arise in understanding and accepting each other, the grace of God helps overrides any misunderstandings between seminarians.

“It is a richness, because these 10 students come from different countries and enrich each other as they prepare for the future ministry of God’s People in their countries.”

As the rector of the seminary serving several countries, he feels a certain weight upon him, but embraces the responsibility with faith.

“I am a rector from the local clergy, the first in the history of this seminary.”

“It’s a big responsibility for me, but on the other hand it’s also an opportunity to serve our Church here in Kazakhstan, to do something with what God has given me,” Fr. Ruslan says.

While the rector admits there are challenges, he is not afraid of them.

Pope asks for prayers for ‘pilgrimage of peace’ to Kazakhstan