Pope: Witnessing to the beauty of marriage 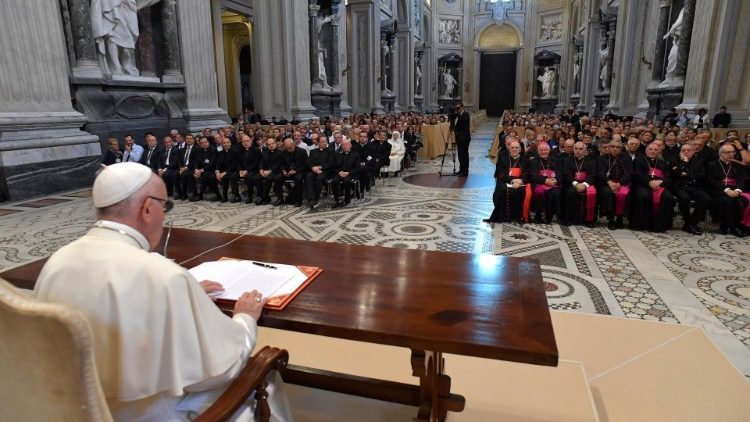 Pope Francis met on Thursday with approximately 850 participants in a course of formation on marriage and family, promoted by the Diocese of Rome and by the Roman Rota. In prepared remarks, the Holy Father spoke about the need for “accompaniment” for Christian spouses, as well as the possibility of a “permanent catechumenate” for the sacrament of marriage, which would involve “preparation, the celebration itself, and the first moments” in the life of the new family. The Pope called for a “shared journey” undertaken by priests, pastoral workers, and Christian spouses.

The day of study and reflection was dedicated to examining the challenges and the pastoral projects concerning the family, considered as a “domestic church and sanctuary of life,” which is “decisive and irreplaceable” for the common good. Reflecting on this theme, Pope Francis spoke on the “vast, complex, and delicate” apostolic field attached to it:

I developed this theme, especially in the Apostolic exhortation Amoris laetitia, putting at the centre the urgent need for a serious path of preparation for Christian marriage, which should not be reduced to a few meetings. Matrimony is not only a “social” event, but a true sacrament that involves an adequate preparation and an informed celebration. The marriage bond, in fact, requires on the part of the engaged couple an informed choice, that focuses the will to build something that can never be betrayed or abandoned.

Young spouses should be accompanied

The Pope noted that some dioceses are already developing initiatives which would make “pastoral work for families more adequate to real situations,” including seminars and retreats, which could also include married couples of long experience, as well as experts in psychology.

Many times the ultimate roots of the problems that come to light after the celebration of the nuptial sacrament, are to be found not only in a hidden and remote immaturity that suddenly explodes, but above all in the weakness of the Christian faith and in the lack of ecclesial accompaniment, in the solitude in which the newlyweds are often left after the celebration of the wedding. Only when faced with everyday life together, which calls spouses to grow in a journey of self-giving and sacrifice, do some realize that they have not fully understood what they were getting into.

“The more the journey of preparation is deepened and extended in time,” the Pope explained, “the more young couples will learn to correspond to the grace and strength of God, and will also develop the ‘antibodies’ needed to face the inevitable moments of difficulty and fatigue in married and family life.” But this, he said, is not enough:

Greater effectiveness of pastoral care is achieved where the accompaniment does not end with the celebration of the wedding, but “escorts” at least the first years of married life. Through talks with the individual couples as well as community moments, it is a matter of helping the young spouses to acquire the tools and support to live their vocation. And this can only happen through a process of growth in the faith of the couples themselves.

Situations of crisis and a new matrimonial process

“With regard to those spouses who experience serious problems in their relationship and find themselves in crisis,” Pope Francis said, “it is necessary to help them to revive the faith and rediscover the grace of the Sacrament; and, in certain cases—to be evaluated with righteousness and inner freedom—to offer appropriate indications to undertake a process of nullity.”

Those who have realized that their union is not a true sacramental marriage and want to get out of this situation, can find in the bishops, priests, and pastoral workers the necessary support, which is expressed not only in the communication of legal norms but above all in an attitude of listening and understanding. In this regard, the law on the new matrimonial process is a valid instrument, which requires that it be applied concretely and indiscriminately by all, at every ecclesial level, since its ultimate reason is the salus animarum [the salvation of souls]! I was pleased to learn that many Bishops and Judicial Vicars have readily accepted and implemented the new marriage process, to the comfort of the peace of consciences, especially of the poorest and furthest from our ecclesial communities.

Welcome also for those living together

Bearing in mind the concern for the eternal salvation of souls, Pope Francis’ final wish was that “the horizon of diocesan family pastoral work would become ever more vast,” assuming the “particular” style of the Gospel. This should include “encountering and welcoming even those young people who choose to live together without getting married,” he said, because they too “need to have the beauty of marriage witnessed to them.”