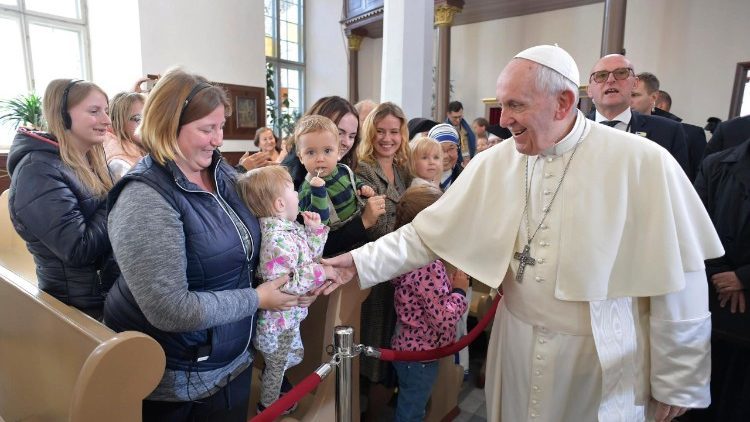 Pope Francis listened to the stories of Marian and Vladimir, both of whom explained how the Church has helped them overcome difficult situations in their lives, before addressing the gathering.

Where there are children there is hope

First he addressed Marian, a mother of nine, who described the nuns that helped her and her family as angels. He told her that “wherever there are children and young people, many sacrifices have to be made, but even more important, there is future, joy and hope”.

Pope Francis reminded her that in Estonia where “the winters are bitter”, “you do not lack the most important warmth, that of the home, the warmth born from being together as a family.”

He also thanked Marian for bringing witness to the work of the sisters, “who were not afraid to go out to where you were in order to be a sign of the closeness and the outstretched hand of God”.

This missionary faith, the Pope said, “goes, like the sisters, through the streets of our cities … telling people with very concrete actions: you are part of our family, of God’s big family in which all of us have a place. Don’t stay outside”.

Allow your heart to be stirred

The Pope then spoke to Vladimir, who described how the Church helped him overcome problems with alcohol and turn his life around. “You met brothers and sisters who made it possible for your heart to be stirred and to realise that the Lord never stopped tirelessly seeking you.” said the Pope.

You, you and you: family

The Pope concluded by inviting those present to continue creating bonds, and going out into the streets to tell everyone that “you, you and you, are part of our family!”. He said that Jesus is “counting on your histories, your lives and your hands” and finally, gave his blessing, in hope that “the Lord can continue to work miracles through your hands”.