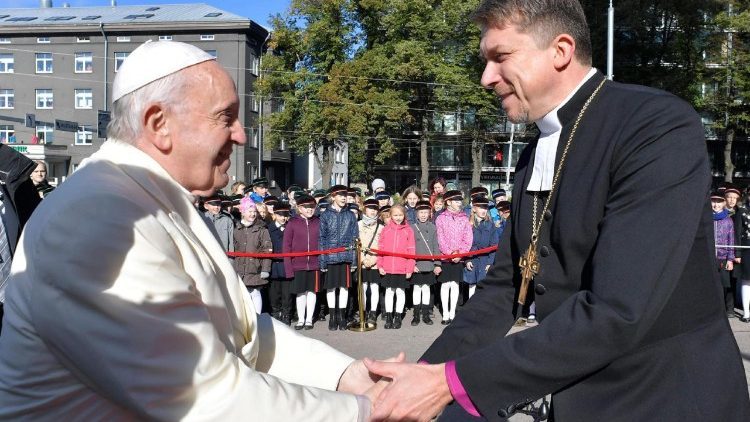 The Most Reverend Urmas Viilma is the Archbishop of the Estonian Evangelical Lutheran Church, the largest Christian denomination in a country where Catholics comprise less than 1% of the population.

His signature,  together with that of the Apostolic Adminstrator Philippe Jourdan,  was on the invitation to Pope Francis to visit Estonia.

And given that the Catholic cathedral is too small to welcome the Pope, and given the crowd of young people who attended the event, the Charles Lutheran Church in Tallinn was chosen to host it.

In an interview with Devin Watkins, Archbishop Viilma speaks of his hopes for the legacy this journey will leave.

Archbishop Viilma explains that Estonian society is very distant from the Church and from Church-related themes. But he says that the fact that Church-related themes have been dominating media headlines in preparation for the Pope’s arrival,  has awakened the curiosity and interest of many Estonians to spiritual and religious matters.

“I hope that many people will start asking themselves questions about God and their personal faith” he said.

He speaks of the need for vibrant collaboration and cooperation between the faith communities in the nation.

“The Pope’s visit itself is a message to the Estonian people because it is very exceptional that the great leader of the Catholic Church is visiting a country where there are only 6,000 Catholics left; it means he is focusing on marginalized people” because from a Christian point of view Estonia is marginalized.

Archbishop Viilma explains that there is no bilateral cooperation between the Lutherans and the Catholics, but a multi-lateral cooperation with all Christian Churches who belonged to the Estonian Council of Churches, founded in 1989, “when we were still part of the Soviet Union”.

He says the members engage in many activities together, including ecumenical services and prayer readings.

Scars left by the Soviet regime

He explains that one of the scars left by the Soviet regime is that religious education has completely vanished from academic curricula, and this has resulted in an agnostic population that does not identify itself as Christian or religious in any way.

He says Estonia  is possibly the only country in the European Union where there are no religious studies in the schools, and 20 years from independence “we have a second generation of Estonians who do not have even a basic knowledge of Christianity or of other religions”.

He points out that many continue to observe Christian traditions and festivities such as Christmas and Easter, “but if somebody asks them whether they are Catholic,  Lutheran or Orthodox, they don’t know because nobody helped them to identify themselves”.

It is a country where the young generation is very well equipped in science and in other academic subjects, but not in Church or religion related themes, he says.

“When we have catechesis groups or confirmation classes, Viilma explains, the average age of the people is about 30, and we start with Bible lessons because they don’t know anything about the Bible or Church.”

That, he concludes, is perhaps the biggest scar left by the regime, because people are not related to the Church and do not know how to relate to it.

But the funny thing is that only 10% of the population describes itself as atheist while 70% is agnostic “so they believe in something although they don’t know how to define it; the good thing is that they are open and positively neutral towards the Church and this helps to engage in dialogue.