Pope at Mass: the cross teaches us not to fear defeat 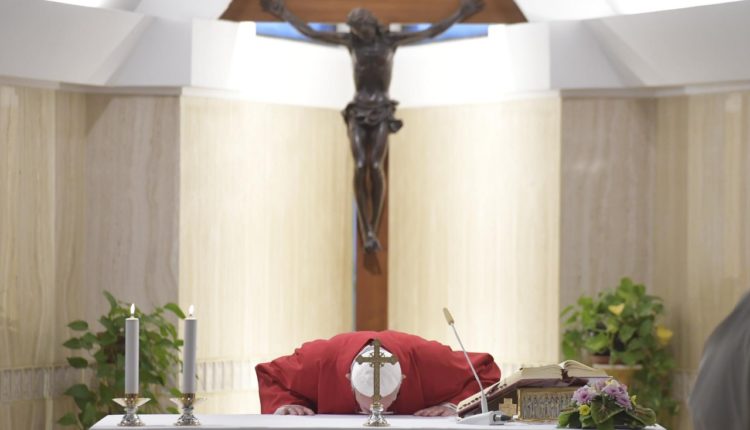 “The cross of Jesus teaches us that in life there is failure and there is victory”, it teaches us not to fear the “dark times” which can be illuminated by the cross, which is a sign of God’s victory over evil.

This was the message at the heart of Pope Francis’ homily on Friday morning during Mass at the Casa Santa Marta.

Describing Satan as evil who is demolished and chained, he warned those present that he “still barks” and that, if you approach him to caress him, “he will destroy you.”

Jesus’ defeat lights up the darkness in our lives

The Pope explained that when we contemplate the cross, the mark of Christians, we contemplate a sign of defeat but also a sign of victory:  “All that Jesus did during his life” failed on the cross – he said – and all the hope of his followers came to an end.

“We must not be afraid to contemplate the cross as a moment of defeat, of failure. When Paul reflects on the mystery of Jesus Christ, he says some powerful things. He tells us that Jesus emptied himself, annihilated himself, was made sin to the end and took all our sins upon himself, all the sins of the world: he was a ‘rag’, a condemned man. Paul was not afraid to show this defeat and even this can enlighten our moments of darkness, our moments of defeat. But the cross is also a sign of victory for us Christians”.

The Pope recalled that in the first Reading, the Book of Numbers tells of the moment during the Exodus when the people who complained “were punished by serpents”. This, he said, refers to the ancient serpent, Satan, the “Great Accuser”. But, the Pope continued, the Lord told Moses that the serpent that brought death would be raised and would bring salvation. Francis explained that this  “is a prophecy”. In fact, he said, “having been made sin, Jesus defeated the author of sin, he defeated the serpent”. And Satan, the Pope commented, was so happy on Good Friday “that he did not notice” the great trap “of history in which he was to fall.

Satan swallowed up Jesus and his divinity

As the Fathers of the Church say, Pope Francis continued, Satan saw Jesus in such a bad state, and like a hungry fish that goes after the bait attached to the hook, he swallowed Him. “But in that moment, the Pope said, he also swallowed His divinity because that was the bait attached to the hook. “At that moment, the Pope said, Satan was destroyed forever. He has no strength. In that moment the cross became a sign of victory”.

The serpent is chained, but you must not approach it

“Our victory is the cross of Jesus, victory over our enemy, the ancient serpent, the Great Accuser” the Pope said. “We have been saved” by the cross, by the fact that Jesus chose to sink to the very lowest point, but with the power of divinity”.

“Jesus said to Nicodemus: When I am lifted up I will draw all people to myself”. Jesus was lifted up and Satan was destroyed. We must be attracted to the cross of Jesus: we must look at it because it gives us the strength to go forward. And the ancient serpent that was destroyed still barks, still threatens but, as the Fathers of the Church say, he is a chained dog:  do not approach him and he will not bite you; but if you try to caress him because you attracted to him as if he were a puppy, prepare yourself, he will destroy you”.

The crucifix: a sign of defeat and of victory

Our life goes on, Pope Francis concluded, with Christ victorious and risen, and who sends us the Holy Spirit; but also with that chained dog, the devil, “whom I must not draw close to because he will bite me”.

“The cross teaches us that in life there is failure and victory. We must be capable of tolerating defeat, of bearing our failures patiently, even those of our sins because He paid for us. We must tolerate them in Him, asking forgiveness in Him, but never allowing ourselves to be seduced by this chained dog. It will be good if today, when we go home, we would  take 5, 10, 15 minutes in front of the crucifix, either the one we have in our house or on the rosary: look at it, it is our sign of defeat, it provokes persecutions, it destroys us; it is also our sign of victory because it is where God was victorious”

Photo Gallery of the house of Blessed Giuseppe Puglisi