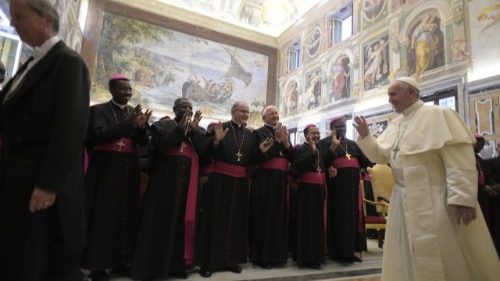 Pope Francis on Saturday met in the Vatican 75 newly-appointed bishops from the mission territories of 34 countries of Africa, Asia, Latin America and Oceania, and urged them to care for their flocks like the Good Shepherd, by being men of prayer, proclamation and communion.

The bishops are participating in a seminar that the Vatican’s Congregation for the Evangelization of Peoples has organized September 3-15 to help them in their ministry.

In a talk to them, Pope Francis said that a bishop is configured to Christ the Good Shepherd and Priest who does not live for himself but offers his life for his sheep, especially the weakest those most in danger, who are made to feel the Lord’s predilection through his gestures and words of comfort.

As a man of prayer, the Pope said,  a bishop always brings his people and situations before God every day, becoming like Jesus the victim and altar for the salvation of his flock.

The second task of a bishop is to go out and proclaim the Gospel in places where the Lord is not known or is disfigured and persecuted, and not to remain seated in his office like a company manager or a prince.   In this duty, he should be a humble witness to the Gospel like Jesus, without giving in to the temptation of power, gratification, worldliness or projecting oneself, and without watering down the crucified and risen Jesus.

A bishop is a man who gathers people together to cement communion by humbly involving himself.   He is rooted in the territory, rejecting the temptation to move out of the diocese frequently, searching for his own glories.  Never tired of listening to his flock and priests, the Pope, said a bishop promotes fraternity showing they are pastors not for prestige, career or ambition but to feed the flock of God, not as masters but as models.

In this regard, he cautioned them against clericalism, which he said is very common in communities with problems of sexual abuse, power and conscience. It corrodes communion, generates division and foments many of today’s evils. “Saying no to abuse,” he said, “means saying no with force to every form of clericalism.”

Another tendency the Pope denounced was what he called “leaderism”, the commanding attitude that could be convenient and attractive, but certainly not of the Gospel.

In their duty as pastors, the Holy Father urged the bishops to especially care for families, seminarians, young people and the poor.

Reminding them that families are the first cells of every society and the first Churches, because they are domestic Churches, he encouraged initiatives regarding marriage preparation and accompaniment for families.  “Defend the life of the conceived as that of the elderly, support parents and grandparents in their mission.”

Regarding seminarians, the Pope called for guaranteeing them a healthy, open, authentic and sincere human formation, giving special priority to vocational discernment.

Reminding the bishops that a better world depends on the young people, the Pope urged the bishops to seek them out and listen and accept them as they are even when influenced by consumerism and hedonism, offering them the Gospel with courage.

Finally, the Pope encouraged the bishops to fight spiritual and material poverty and dedicate time and energy to the least, without fear of getting their hands dirty.

He cautioned them against being lukewarm, mediocre and slothful, tendencies, he said, that avoid sacrifice, lead to intolerance and disfigure the Gospel.

Reminding them that the devil enters through the pocket, the Pope concluded wishing them “the holy restlessness for the Gospel, the only restlessness that,” he said, “gives peace.”