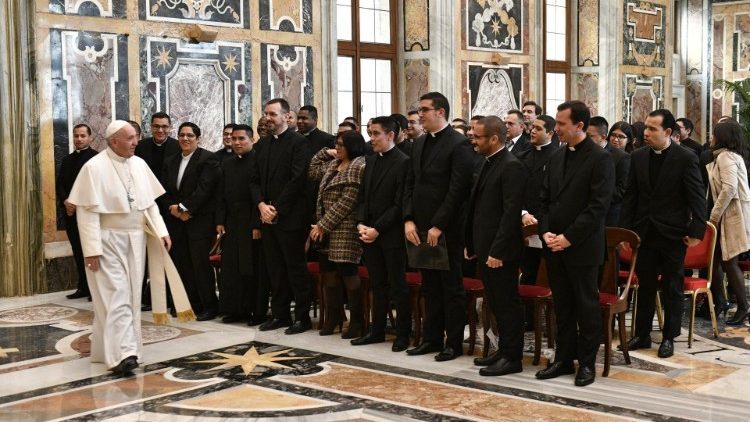 Pope Francis on Thursday urged Latin American priests to create bonds of friendship and fraternity among themselves and be close to the life of their people with the love of Christ.

He was speaking to some 100 student priests and staff of the Collegio Pio Latino, or the Latin American College of Rome, on the occasion of its 160th anniversary this year.

A pontifical college in Rome is a hostel for student priests who pursue higher ecclesiastical studies in various Church universities and institutes.

The Pope noted that the Latin American culture was being fragmented by confrontations, divisive discourses, hatred towards those who are “not our own” and by importing cultural models that are alien to its identity.  The Church that is not alien to these tendencies and “ideological colonizations ”, the Pope warned, risks being disoriented and uprooted if its vocation to be a land of encounter is forgotten.

Noting that their continent is marked by old and new wounds, the Holy Father urged the Latin American student priests to use their time in Rome and in the College to be artisans of communion by creating bonds and alliances of friendship and fraternity, making their own the joys and hopes, the sadness and anguish of their brothers, and by giving a name and face to the concrete situations of their peoples.

The Holy Fathers urged them to create a priestly community and communion that is born of concrete solidarity among them, transcending a “parochial” mentality and opening themselves to others in order “to weave and heal hope”.

Close to the people

The love for Christ and of Christ, the Pope pointed out cannot be manifested except in the passion for life and for the destiny of our peoples and in special solidarity with the poorest, suffering and needy.   Hence the need to develop the taste of always being close to the life of the people; never to isolate oneself from them.

Never curl up in personal or community sheds that separate them from the “knots” where history is written, the Pope urged.  This is why he said it is providential that the 160 years of Collegio Pio Latino was taking place in the year of the canonization of the St. Oscar Romero, a former student of their College and a living sign of the fruitfulness and sanctity of the Latin American Church.

In conclusion, the Pope told the student priests to avoid being “state priests”, never to be afraid of holiness and to spend their lives for their people.