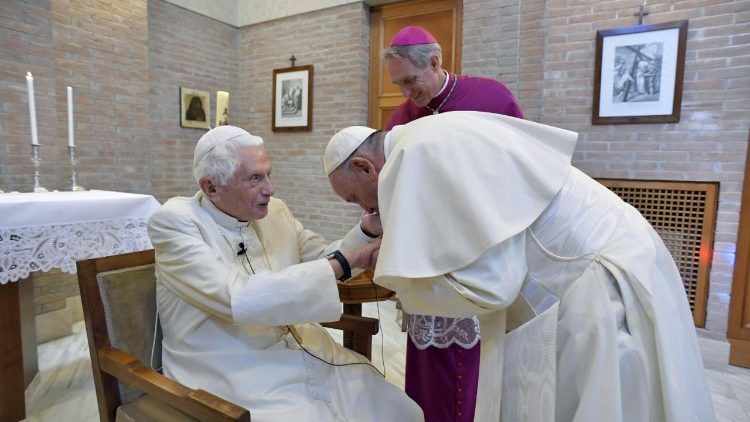 These were written to mark the inauguration of the 2018 International Symposium “Fundamental rights and conflicts among rights”, being held by the Joseph Ratzinger-Benedict XVI Vatican Foundation in Rome.

Pope Emeritus Benedict XVI expresses his respect for the theme of this year’s symposium. In his letter, he recalls his “immediate appreciation of the initiative” when it was first announced to him, and states that he considers the symposium “extremely useful”. He appreciates it in particular, he says, because it is important to discuss the “problematics of ‘the multiplication of rights’” as well as “the risk of the ‘destruction of the idea of Rights’.”

This topic, the Pope Emeritus says, is fundamental to protect the foundations necessary “to live together as a human family”, as this is a theme which, he believes, “deserves to be placed at the heart of deep, systematic reflection”. He acknowledges that this is precisely what the symposium is trying to achieve.

Pope Francis’ letter begins by wishing all speakers and participants at the symposium “…fruitful work”. He talks about the relevance the Symposium has today, as we approach the 70th anniversary of the United Nations Declaration of Human Rights. The Pope sees this occasion not only as an opportunity to celebrate the memory of this Declaration but also as an opportunity to “impose deep reflection on its application and on its development in the vision of Human Rights in today’s day and age”.

The Pope mentions that during last year’s Discourse to the Diplomatic Corps, dedicated precisely to this Declaration, he “observed that its aim is to remove the separating walls that divide the human family and to favour integral human development.” He says that as the years go by “new rights” have formed and that, at times, they contradict one another opening “a series of problems that deeply involve the basis of the concept of rights”.

“Pope Benedict XVI”, he continues, “shone light on the urgencies of these themes and intervened authoritatively, both as a thinker and as a pastor”. For this reason, Pope Francis explains, Benedict XVI was awarded an honorary degree in Law.

Finally, Pope Francis expresses his wish that through the inspiration of “our beloved Pope Emeritus” the symposium might help to contribute to highlighting an essential problem regarding the protection of Human Dignity and Integral Development.

WWI: Papal diplomacy during and after The Great War