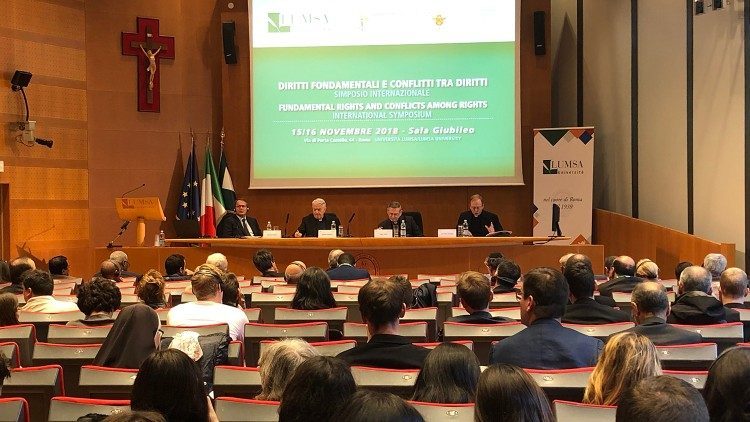 The two day symposium which ends Friday has been organized by the Joseph Razinger/Benedict XVI Vatican Foundation. Among those taking part is Vatican Secretary of State Cardinal, Pietro Parolin, as well as, Princeton Professor Robert George, and Harvard Professor, Mary Ann Glendon. In an address to the meeting on Friday, Professor Glendon spoke on the “universal dimension of the Universal Declaration of Human Rights and its effective application.”

Pick and choose attitude to rights

During her speech, the Harvard Professor spoke of a “pick and choose attitude to rights” and said that Human Rights ideas have become a victim of their own success. Speaking to Vatican News on this point, she said, “unfortunately as soon as it showed its power all kinds of interest groups said, hey let’s have our agenda items be declared human rights.”

Mary Ann Glendon also addressed the attacking of rights that do not suit an agenda, stressing it is something that we should be very concerned about because, “the principles that were put in documents like the Universal Declaration are mutually conditioning, let’s take the biggest example, we don’t want to give up freedom, we don’t want to give up equality, but those two are always in tension and that’s part of the dynamic tension that we live with in the democracies that we’re so fortunate to have, she said.”

“You could say”, the Professor noted, “that the multiplication of rights cheapens the currency;it has a lot of very destructive effects, it undermines the normal process that we’re so lucky to have in the liberal democracies of being able to talk to our fellow citizens, arrive at compromises; that is what democratic politics is all about and if you take those decisions out of the political process and have an all or nothing decision by a court, then here’s what happens, the losers go away angry and disappointed and they feel they have no remedies.”

Universal Declaration, the importance of reflection

Asked about the importance of reflecting on the Universal Declaration seventy years on from its adoption, Professor Glendon described it as, “very important because one of the earliest and most profound critics of the abuses of the human rights idea was Benedict XVI ten years ago, in a speech to the United Nations he laid out in great detail most of the problems that have really come to the point where they threaten the very idea of universal human rights.”

Fr Arrupe: Cause for Canonization to open in February