Pope urges for a global family of nations based on unity, solidarity where the weak are protected

On a visit to Dublin, Ireland, on the occasion of the World Meeting of Families, Pope Francis on Saturday addressed authorities, civil society and the diplomatic corps. 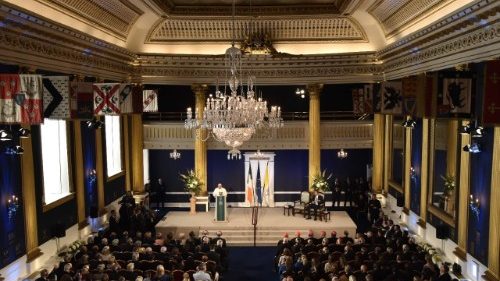 Pope Francis on Saturday called on the international community to create a global family of nations and peoples with a sense of unity and solidarity, especially with the weakest of our brothers and sisters. While calling for the protection of the vulnerable, he also denounced the “grave scandal” of clerical sexual abuse of young people by members of the Church in Ireland as “repellent crimes”.

The Pope’s call came in his address to Irish authorities, civil society and the diplomatic corps at Dublin Castle, part of his 2-day visit to Dublin, Saturday and Sunday, on the occasion of the World Meeting of Families which is taking place in the Irish capital, August 21-26.

“Families,” the Pope said, “are the glue of society; their welfare cannot be taken for granted, but must be promoted and protected by every appropriate means.”

Noting that “racial and ethnic hatred, intractable conflicts and violence, contempt for human dignity and for fundamental human rights, and the growing divide between rich and poor,” go against the sense of the entire world as a single family, the Pope urged that we never lose hope or the courage to persevere in the moral imperative to be peacemakers, reconcilers and guardians of one another.

He particularly expressed satisfaction over the Good Friday Agreement signed 20 year ago to bring an end to the long conflict between Protestants and Catholics in Northern Ireland, and hoped for a “future of harmony, reconciliation and mutual trust.”

The growth of a materialistic “throwaway culture”, the Pope noted, has in fact “made us increasingly indifferent to the poor and to the most defenceless members of our human family, including the unborn, deprived of the very right to life.”  “Perhaps the most disturbing challenges in this regard today is the massive refugee crisis,” the Pope said and called for a wisdom, breadth of vision and humanitarian concern that go far beyond short-term political decisions.

Speaking about protecting the vulnerable, such as women, children and orphans, the Pope acknowledged the “grave scandalcaused in Ireland by the abuse of young people by members of the Church charged with responsibility for their protection and education.” Pope Francis said that “the failure of ecclesiastical authorities – bishops, religious superiors, priests and others – adequately to address these repellent crimes has rightly given rise to outrage, and remains a source of pain and shame for the Catholic community.”  He called on the Church’s leadership to remedy past mistakes and to adopt stringent norms meant to ensure that they do not happen again.

In his recent “Letter to the People of God”, the Pope said he has called for greater commitment to “eliminate this scourge in the Church”.

However, Pope Francis acknowledged that the Church in Ireland, in the past and present, has played a role in “promoting the welfare of children that cannot be obscured.”  He hoped that the “gravity of the abuse scandals, which have cast light on the failings of many, will serve to emphasize the importance of the protection of minors and vulnerable adults on the part of society as a whole.”

The Holy Father expressed satisfaction over Holy See-Irish relations and the nation’s rich Christian heritage of more than a millennium and a half, recalling the first preachers Palladius and Patrick, and saints and scholars like Columba, Columbanus, Brigid, Gall, Killian and Brendan.

Dublin is ready and waiting to greet Pope Francis