Dublin is ready and waiting to greet Pope Francis 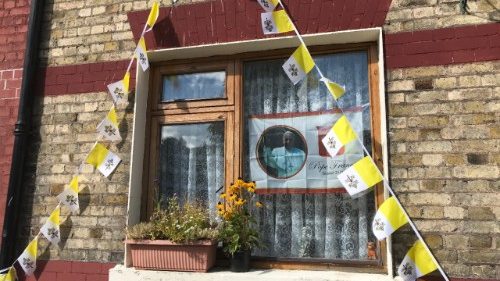 All through the night last minute preparations have been continuing here in Dublin for the visit of Pope Francis. Walking through the streets  this morning a notable difference were the barriers that had been put in place by the Irish police or the Gardai as they are known.  Vatican flags can be seen flapping in the breeze at a number of stalls. One woman walks past the famed Trinity Collage holding her yellow and white flags preparing to greet the Pope.

The city is now officially in lockdown and security is being described as being greater that for the visits of Queen Elizabeth II and President Obama. Indeed the front of the Irish Examiner reads “major security operation underway.” All the front pages here are awash with the Papal Visit. The Irish Independent’s headline is, “Eyes of the world on our reaction to Papal visit”, referring to the clerical abuse scandal; and inside there is also a pull-out section with the Pope on the cover which reads, “a Pope for the People”.

It is estimated that up to 750,000 people are expected to turn out for the various events in Knock and Dublin.

Up to now people here in the centre of Dublin have been going about their business as usual, but on this Saturday morning there really is a feeling of anticipation in the air as the wall to wall coverage for this Papal visit, the first in nearly 40 years

What children and teens have been up to at WMOF

Pope urges for a global family of nations based on unity, solidarity where the weak are protected