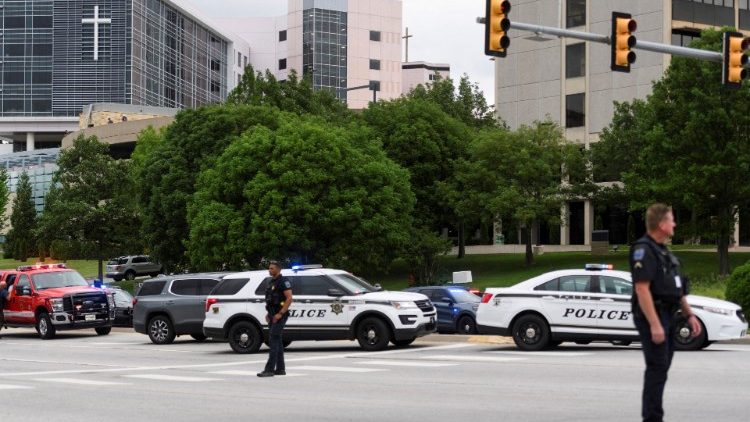 A gunman has fatally shot four people at St. Francis Health System campus in Tulsa, Oklahoma in the latest mass shooting incident in the US that highlights the ongoing discussion on gun control. Pope Francis and Church authorities have called for a culture of life and for the adoption of a path of solidarity as opposed to one of violence.

At least four people were killed in a shooting on Wednesday at a hospital campus in Oklahoma.

Police say that the shooter who has not yet been identified is also dead, of an apparent self-inflicted gunshot wound.

According to media reports, the gunman, armed with a long rifle and a handgun opened fire at St. Francis hospital campus in Tulsa, in an attack that lasted for about four to five minutes on Wednesday.

The motive and the circumstances of the deadly attack are still unclear, but Eric Dagleish, deputy chief of the Tulsa police department, who confirmed the incident, said that police received a call of an active shooter at 16:52 on 1 June.

Officers arrived at the scene of the shooting within three minutes, which, they say, helped to ensure that the death toll did not go higher. However, multiple injuries have been confirmed.

Dagleish explained that the officers who arrived at the scene heard shots in the building and that is what directed them to the second floor where they encountered the gunman.

He described the unidentified shooter as a black male believed to be between the ages of 35 and 40 years.

Mass shootings in the US

Wednesday’s shooting marks another incident of gun violence in the US which is still recovering from last week’s shooting in Uvalde, Texas, where 19 children and two teachers were killed on 24 May, when an 18-year-old gunman opened fire at Robb Elementary school. On Wednesday, that shooter was charged with domestic terrorism and murder.

Before that, on 15 May, a gunman attacked a lunch banquet at a Church frequented by Taiwanese nationals in Laguna Woods, California, killing one person and wounding five others before he was stopped and hogtied by congregants.

On 14 May, another 18-year-old gunman fatally shot 10 black people at a Buffalo supermarket, in an attack that authorities say was motivated by hate.

US President Joe Biden has been briefed about the shooting and the White House said it was closely monitoring the situation.

The Church against gun violence

Church authorities have not been silent about the growing number of mass shootings and incidents of gun violence. Following the shooting in Texas, Pope Francis expressed deep sadness over the loss of innocent lives and offered prayers for the children and teachers who were killed in the deadly attack. He also reiterated his call for an end to arms trafficking.

“I am praying for the children and adults who were killed and for their families. It is time to say enough to the indiscriminate trafficking of arms. Let us all commit ourselves so that such tragedies never happen again,” the Pope appealed during the General Audience on 25 May.

Likewise, Cardinal Blaise J. Cupich, Archbishop of Chicago bemoaned the gun violence in the US. “We don’t yet know whether the Uvalde gunman took advantage of ‘permitless carry,’ but we do know that America is awash in guns. We have more firearms than people,” he said in a statement after the shooting.

“As I reflect on this latest American massacre, I keep returning to the questions: Who are we as a nation if we do not act to protect our children? What do we love more: our instruments of death or our future?” Cardinal Cupich asked.

The US Bishops’ Conference also joined in mourning the victims of school shootings and the killing of innocents. ” Our Catholic faith calls us to pray for those who have died and to bind the wounds of others”, the USCCB said in a statement. “As we do so, each of us also needs to search our souls for ways that we can do more to understand this epidemic of evil and violence and implore our elected officials to help us take action.”

In a series of Twitter posts on Thursday, Governor Kevin Stitt described the shooting as “a senseless act of violence and hatred” and asked Oklahomans to come together to support the St. Francis Health System community, and to grieve with those whose lives have been forever changed by the incident.

He also expressed gratitude for “the quick and brave actions of the Tulsa Police Department and other first responders who did their best to contain a terrible situation.”

Tulsa Mayor, G.T. Bynum also expressed the “community’s profound gratitude for the broad range of first responders who did not hesitate” in responding to the incident.