Pope to Salesian Sisters: ‘Renew your mission in listening love for young people’ 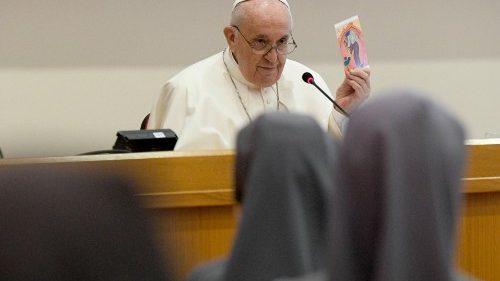 Pope Francis urges members of the 24th General Chapter of the Institute of the Daughters of Mary Help of Christians to be inspired by the example of Our Lady and encourages them in their service of young people and of the poor.

Pope Francis visited the General House of the Salesian Sisters of Don Bosco on Friday, as the congregation concludes their 24th General Chapter.

The Pope opened his discourse to members of the Institute of the Daughters of Mary Help of Christians – as the order is formally known – by welcoming the newly-elected Superior General, Mother Chiara Cazzuola. He wished her well in her work, together with the new council, and thanked the Superior and the outgoing councilors.

He noted that in these days of work, the Salesian Sisters have met under the theme “Communities that generate Life in the Heart of Contemporaneity” and have illuminated it with the words of Our Lady at the wedding in Cana: “Do whatever he tells you,” (Jn 2: 5).

The Holy Father asked them, on the one hand, to keep in mind the multicultural social context, marked by dramatic tensions and challenges such as the Covid-19 pandemic; and on the other hand, to listen to the Word of God, especially in these “fragile and uncertain times with the forms of poverty that the crisis has produced and multiplied.”

Pope Francis noted that reawakening the original freshness of the vocational fruitfulness of the institute – the goal which they set for themselves – is a key perspective for responding to the needs of today’s world which needs to discover in the consecrated life “the proclamation of what the Father, through the Son in the Spirit, accomplishes by His love, His goodness, His beauty.”

“This does not mean denying the fragility and struggles present in communities,” he said, “but believing that this situation can help them to transform today into a kairós, a favorable time to go to the charismatic roots, to work on the essential, rediscovering, you first, the beauty of consecrated life.”

He highlighted that this challenge invites them to renew their “yes” to God in this time, “as women and communities who allow themselves to be questioned by the Lord and by reality. Thus, he said, they can become prophets of the Gospel, witnesses to Christ and His way of life.”Listen to our report

The way of the Church, God’s way

The Pope noted that the Second Vatican Council has shown the Church “this way, which is God’s way: incarnation in history, immersion in the human condition.”

“This presupposes a firm rooting in Christ, so as not to be at the mercy of worldliness in its various forms and disguises,” he stressed, adding that, for consecrated persons, “this requires creative fidelity to the charism, which is a living reality, not an embalmed relic.”

So, the great responsibility is to “collaborate with the creativity of the Holy Spirit, to revisit the charism and ensure that it expresses its vitality today,” he said, adding that from this derives true youthfulness “because the Spirit makes all things new, and with his strength he helps you to find new expressions of the same gift that is the charism.”

“This is the way of the Church that the Holy Popes of the Council and of the post-Council period have shown us: John XXIII, Paul VI, John Paul I – soon to be Blessed – and John Paul II, whose memory we celebrate today,” he noted.

Pope Francis went on to point at another aspect of the theme of the Chapter: “the need to grow communities interwoven with intergenerational, intercultural, fraternal and cordial relationships.”

In this regard, he urged them to draw from the family spirit which characterized the first community of Salesian Sisters at Mornese and which helped to seize in diversity, “an opportunity to practice welcoming and listening, valuing differences as a richness.”

He also encouraged the Salesian sisters to pursue their commitment to work in relationship with other congregations, “seeking to live relationships of reciprocity and co-responsibility.” He added that for them, “this is a concrete way of living synodality” through “docility to the Holy Spirit, openness to his newness and surprises.”

Service to young people and the poor

“This same openness to the Spirit enables you to persevere in your commitment to be generative communities in the service of the young and the poor,” Pope Francis said.

He urged them as outgoing missionary communities to be ready to announce the Gospel to the peripheries with the passion of the first members of their institute.

The Holy Father further encouraged them to work with young people, despite the difficulties of accompanying children and adolescents, adding that it is for this reason that he wanted the Synod “for young people and with young people” which resulted in the Exhortation “Christus vivit.”

“I know that you are using it; I encourage you to continue to do so: I am certain that there you can find various ideas in harmony with your charism and your educational service,” Pope Francis said.

As the institute prepares to celebrate the 150th anniversary of its founding, Pope Francis invited its members to seize the occasion as “an opportunity for renewal and vocational and missional revitalization.”

“Do not forget the grace of the beginnings,” he exhorted, “the humility and the smallness of the beginnings that made God’s action transparent in the life and in the message of those who, filled with wonder, began this journey.”

“Mary Help of Christians will assist you: you are her daughters! Her words at the wedding feast of Cana were and are a beacon of light for your discernment: ‘Do whatever He tells you’.”

The example of Mary

The Pope pointed out that like Our Lady, “the attentive woman, fully embodied in the present and solicitous, caring,” they too can “listen attentively to reality, grasp situations of need, when the ‘wine’, that is, the joy of love, is lacking, and there bring Christ, not in words but in service, in closeness, with compassion and tenderness. To bring the hope that does not disappoint.”

To be women of hope like Our Lady, Pope Francis encouraged the sisters to start from “the Salesian identity, with the Salesian style: especially listening, active presence, love for the young”.

Thus, accompanied by Mary, they can go forward with enthusiasm on the path that the Spirit suggests “with a heart open to welcoming the promptings of God’s grace, and with an attentive gaze that recognizes the needs and urgencies of a world in constant change.”

Concluding, Pope Francis thanked the Salesian Sisters, blessed them, and expressed his closeness to them in prayer.