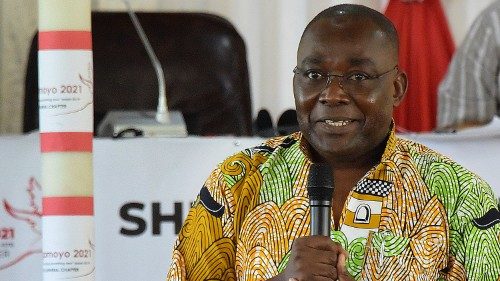 The General Chapter of the Spiritans, taking place in Bagamoyo, Tanzania, has elected as new Superior General, Fr Alain Mayama.

Fr Mayama, a native of Congo Brazzaville is the first African Spiritan to hold the position of Superior General. It is the highest office in the Spiritan Congregation. The Superior General, together with his Council are responsible for leading Spiritans around the world.

Born in Congo Brazzaville in 1971, Fr Mayama made his Perpetual Religious Profession in 1999. He was ordained priest in 2000.

Fr Mayama began his missionary life in Cameroon as a formator. After his studies in the USA, at Duquesne University, he served as Chaplain of a hospital in Port Huron, Michigan. He continued his Mission as a formator in Libreville, Gabon, from 2008 to 2010. He returned to Congo Brazzaville to serve as Provincial Superior in the same year of 2010. At the General Chapter held at Bagamoyo in 2012, he was elected General Assistant, based in Rome. It is the office he has held until his election as Superior General.

Fr. Alain Mayama will have the responsibility of animating the more than 2 500 Spiritans working in more than 60 countries on five continents. He will also have to welcome and animate the thousands of lay people who share the Spiritan Spirituality and Mission.

Pope to Salesian Sisters: ‘Renew your mission in listening love for young people’