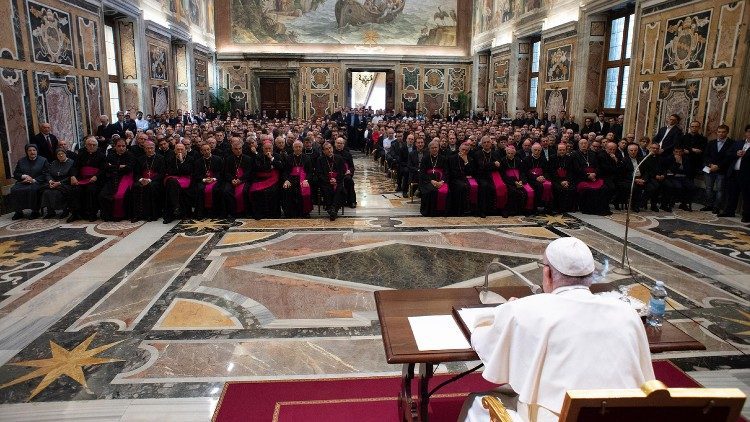 Pope Francis recently met with seminarians from Northern Italy’s Lombardy region, and after hearing their questions offered them solutions and reflections.

The riches of doubt

One young man asked Pope Francis how he and his fellow seminarians can continue on their path when facing the “cross of doubt”, a term which he used to refer to the difficulties faced when following Jesus in contemporary society.

“Doubt is a richness” replied the Pope, because “it puts me in difficulty and makes me think: does this thought come from God, or does it not come from God? Is this positive or is it not positive?”.

He urged them to “take doubt as an invitation to seek the truth, to seek an encounter with Jesus Christ” saying that “this is true doubt.”

What did Jesus do?

“Contemporary society” is brought up again in the next question, which asks “how to educate about love towards the Church” when facing “an increasingly secularized world”.

Pope Francis answered with two questions: “which world was more secularized, ours or Jesus’? Whose was more corrupt, ours or Jesus’?” He said that both are equally secularized. “The corruption was the same”, said the Pope. Therefore, he said, our actions must be concrete, as Jesus’ were. “And what did Jesus do?”, the Pope asked, “closeness: encounter”, which, he explained “is a gift of God”.

Doesn’t matter how many

Father Davide, who was ordained only two weeks ago, asked the Pope how to face the worrying scandals that also involve consecrated people and “How to help the faithful not to lose hope despite the deficiency of their ministers?”

The Pope said that behind his question “lies the abuse scandal”. He goes on to say the statistics show that 2% of abuse cases are committed by priests. He said “we are not to justify ourselves because we are only 2%”. “No.”, he said, “Even if it was just one single priest, that would be monstrous.” He referred to it as “a global scandal, that makes one reflect on the human sacrifices of children as pagans once did.” Pope Francis concluded that “the greatest scandal to me, is the frivolous priest”.