Pope to German journalists: ‘Thanks for focusing on people’ 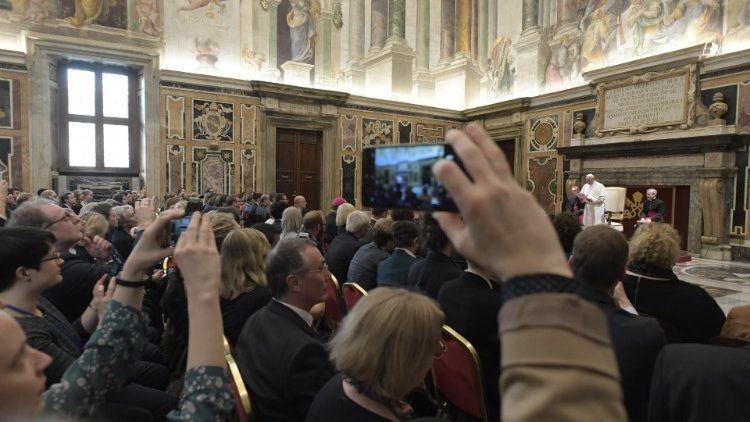 A group of students and faculty from the Institute for the Promotion of Young Journalists (IFP) in Germany celebrating the 50th anniversary of its foundation, met in audience with Pope Francis on Friday. The Pope thanked them for their commitment to forming journalists and said that Germany is fortunate to have so many professionally trained Catholic journalists.

“A warm welcome to all of you” Pope Francis began.  The Pope then thanked the Institute’s Directors as well as all the faculty, alumni, friends and supporters—past and present—who founded and sustained it through it’s 50 years of existence. “Germany can consider itself fortunate,” he said, ”knowing that there are many IFP graduates among the many journalists, that is, both in the secular and ecclesial media.”

Pope Francis then reminded those present that a Christian journalist stands out for positive attitudes and professional ethics. It is a commitment, he said, rather than just a job.

“Thank you,” the Pope concluded, “because as journalists you focus on people and call unjust what is unjust. Thank you because you also speak about the beautiful things that put people at the center that perhaps appear less on the front page. Thank you because with your Christian style you accompany the work of the Church. I hope you will continue to do a journalism by the people, for the people. And, please, don’t forget to pray for me.”

About the Institute for the Promotion of Young Journalists

The IFP is a Catholic school of journalism in Germany. It provides training in order to form critically minded journalists who will reflect Christian ethical principles in their professional work. Many IFP alumni have interned for Vatican News, and its predecessor, Vatican Radio.

Pope at Mass warns against idolatry of money in the Church