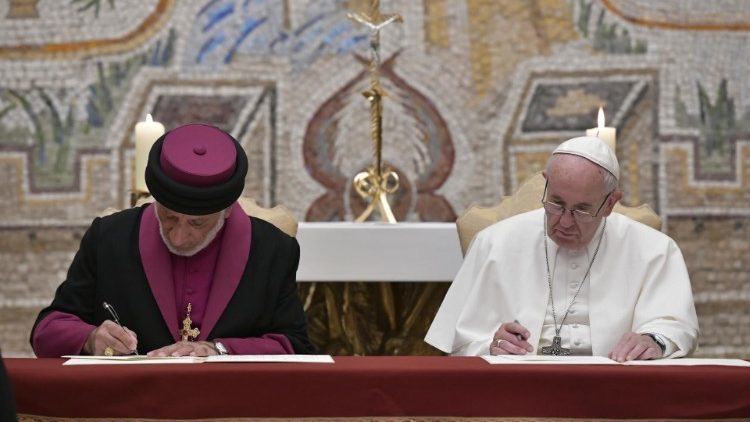 Pope Francis signed a Common Statement on Friday with Mar Gewargis III, Catholicos Patriarch of the Assyrian Church of the East.

The two religious leaders signed the statement at the end of their meeting in the Vatican, following a moment of prayer for persecuted Christians in the Middle East.

In the statement, the Pope and the Patriarch encourage their ongoing theological dialogue, and call for an end to violence against Christians in the Middle East.

They say it is impossible to imagine a Middle East without Christians.

“This conviction is founded not simply on religious grounds, but also on social and cultural realities, since Christians, with other believers, greatly contribute to the specific identity of the region: a place of tolerance, mutual respect and acceptance.”

Christians risk leaving the region, they note, if peace is not restored through dialogue.

“A truce maintained by walls and displays of power will not lead to peace, since genuine peace can only be attained and preserved through mutual listening and dialogue.”

Pope Francis and Patriarch Gewargis also appeal to the International Community to put in place “a political solution that recognizes the rights and duties of all parties involved.”

Finally, the two leaders affirm the need for interreligious dialogue “grounded in an attitude of openness, truth, and love.”

Dialogue, they say, “is also the best antidote to extremism, which is a threat to the followers of every religion.”

Pope to German journalists: ‘Thanks for focusing on people’