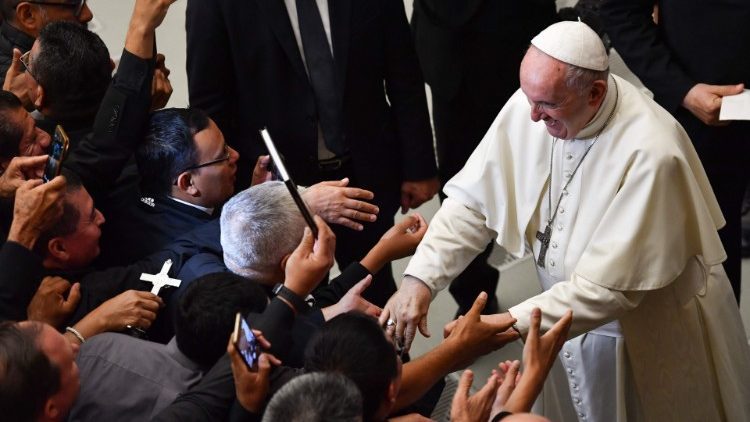 In his address on Monday the 15th of October, Pope Francis greeted four groups separately. He found, for each of them, a lesson from Saint Óscar Romero, who was canonized in the Vatican one day before, applicable to their lives.

Pope Francis’ first greeting went to his “brothers in the episcopate”: the bishops of El Salvador – the birthplace of Saint Romero. He reflected on the fact that Archbishop Romero “knew how to perfectly embody the image of the Good Shepherd, who gave his life for his sheep.” He specified that “now, more than before his canonisation”, the bishops could “find in him ‘example and encouragement’”. “An example of one who gives priority to those most in need of God’s mercy”. “Encouragement” he continued, to bear witness to the love of Christ”, whilst coordinating the collaboration of each member of the Church. This, said the Pope, to help the bishops be “signs of this unity within the diversity which characterises the holy people of God”.

Work for those seeking forgiveness

Pope Francis then greeted the “numerous priests and religious men and women present”. He addressed them saying “you, who felt called to live a Christian commitment, inspired by our new Saint…”. He urged them to “work without rest” to help God forgive all those who repent.

To the “pilgrims who came to Rome to attend the canonisation.” he said that Saint Romero’s message “is to be directed at everyone, without exception”. Saint Óscar Romero said that every Catholic must be a martyr, “because being a martyr means bearing witness”.

Because, as Pope Francis explained, “God wishes to be present in our lives and he calls us to announce his message of freedom to the whole of humanity.”. He said that it is only in Him that we can be free: “free of sin, free from evil, from hate in our hearts, free to love and welcome the Lord” and our brothers and sisters. “A true freedom”, to “wake up the hope of salvation in each heart”.

The Pope admitted that he knows this “is not easy”, and this is why, he said “we need prayer”. We need to be “united with God” and “in communion with the Church”, which Saint Óscar Romero said cannot be done “without ministry in the Church”.

Finally, Pope Francis sent his greetings to “the holy people of God in El Salvador” who he said rejoice in seeing one of their countrymen being honoured. He praised them for their religious life, which they have applied to both their social and family lives, despite having faced “the scourge and division of war” in their recent history.

Pope Francis concluded using the memory of Saint Óscar Romero as an “opportunity to launch a message of peace and reconciliation to all of the cities of Latin America”.