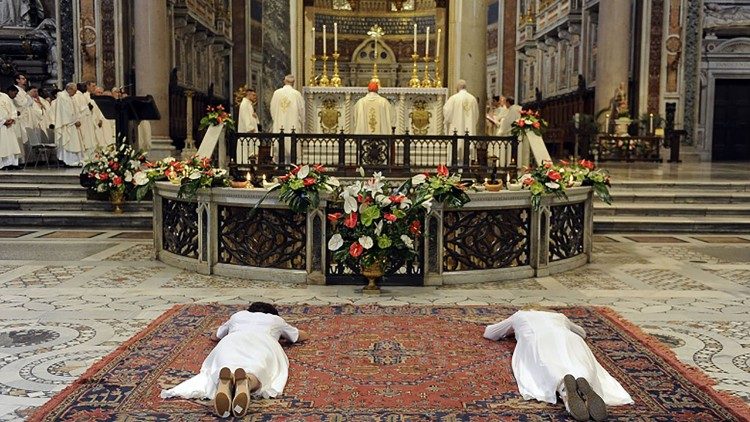 In a Message on the fiftieth anniversary of the promulgation of the revised Rite of Consecration of Virgins, Pope Francis reminds Consecrated Virgins that through their calling they reflect the unity of the Church, the Bride of Christ.

Pope Francis opened his message to Consecrated Virgins by describing their vocations as “a sign of hope” which points “to the fidelity of the Father”. Even today, the Pope said, He awakens “the desire to be consecrated to the Lord in virginity” in the hearts of some women.

Pope Francis continued by saying that, accompanied by their Bishops, Consecrated Virgins have become “increasingly conscious of the distinctive nature” of their consecrated life. “The gift of your vocation finds expression within the symphonic unity of the Church, which is built up when she can see in you women capable of living the gift of sisterhood”, said the Pope.

“Do not extinguish the prophetic nature of your vocation”, continued Pope Francis. “You have been called by God’s mercy to make your lives a reflection of the face of the Church, the Bride of Christ”, he added.

The Pope then recalled that the Homily proposed for the Rite of Consecration “exhorts you to ‘Love everyone, especially those in need’”. “Your virginal consecration helps the Church to love the poor, to discern forms of material and spiritual poverty, to help those who are weak and vulnerable, those suffering from physical and mental illness, the young and the elderly, and all those in danger of being marginalized or discarded”, he explained.

“Be women of mercy, experts in humanity”, urged the Pope, adding, “women who believe in the ‘revolutionary nature of love and tenderness’”.

Pope Francis continued, saying the pandemic is teaching us that the time has come to eliminate inequalities. He urged Consecrated Virgins not to close their eyes to what is happening around us, nor to flee from it, but rather to allow themselves to be disturbed by it. “Be present and sensitive to pain and suffering”, he said.

The Pope urged Consecrated Virgins to be “a sign of the spousal love uniting Christ to the Church, virgin and mother, sister and friend of all”.

“By your gentleness weave a web of authentic relationships that can help to make the neighbourhoods of our cities less lonely and anonymous. Be forthright, capable of parrhesia, but avoid the temptation to chatter and gossip. Have the wisdom, the resourcefulness, and the authority of charity, in order to stand up to arrogance and to prevent abuses of power”.

The Pope concluded by blessing each Consecrated Virgin, as well as “all those women preparing to receive this consecration, and all those who will receive it in the future”.

A Consecrated Virgin is a never-married woman who dedicates her perpetual virginity to God and is set aside as a sacred person who belongs to Christ in the Catholic Church. The Congregation for Institutes of Consecrated Life and Societies of Apostolic Life estimates there are more than 5,000 consecrated virgins on all five continents “in very diverse geographic areas and cultural contexts.”