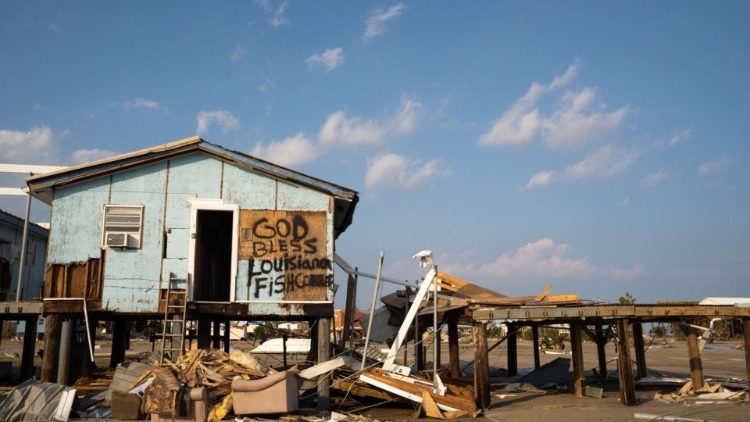 Pope Francis turns his thoughts to north Americans affected by devastating floods and to Jews across the world as they prepare to celebrate the Jewish New Year.

Pope Francis said he is praying for the victims and for all those who have been affected by Hurricane Ida, a monster storm that triggered flooding and widespread damage.

Speaking after the Angelus prayer in St. Peter’s Square, the Pope said he is praying “for the people of the United States of America who have been struck in recent days by a severe hurricane. May the Lord receive the souls of the deceased and support those who are suffering from this calamity.”

More than 40 people were killed in New Jersey, New York City, and at least 12 in Louisiana, where at least 718,000 people are still without power after Hurricane Ida made landfall last Sunday triggering floods, downing trees, and creating serious damage.

The Pope also turned his thought to all those who are preparing to celebrate the Jewish New Year, Rosh Hashanah, in the coming days, “and then the two feasts of Yom Kippur and Sukkot.”

“I extend my heartfelt good wishes to all my brothers and sisters of the Jewish religion: may the New Year be rich in fruits of peace and good for those who walk faithfully in the Lord’s Law,” he said.

The Pope also highlighted the Beatification on Saturday in Catamarca (Argentina), of Mamerto Esquiú, Friar Minor, and Bishop of Cordoba.

“At last an Argentinean Blessed!”, he said, describing Mamerto Esquiú as a “zealous announcer of the Word of God, for the edification of the ecclesial civil communities.”

“May his example help us to always unite prayer and apostolate, and to serve peace and fraternity,” the Pope said asking for applause for the new Blessed.

The Pope also recalled the anniversary of the death of Mother Teresa of Calcutta, a day that is observed as International Day of Charity.

He extended his greeting to all the Missionaries of Charity – the Order founded by Mother Teresa – whom, he said, are engaged throughout the world “in often heroic service,” and he made a special mention of the Sisters of the “Gift of Mary” here in the Vatican.

Pope calls for welcome and protection for Afghan refugees