Pope calls for welcome and protection for Afghan refugees 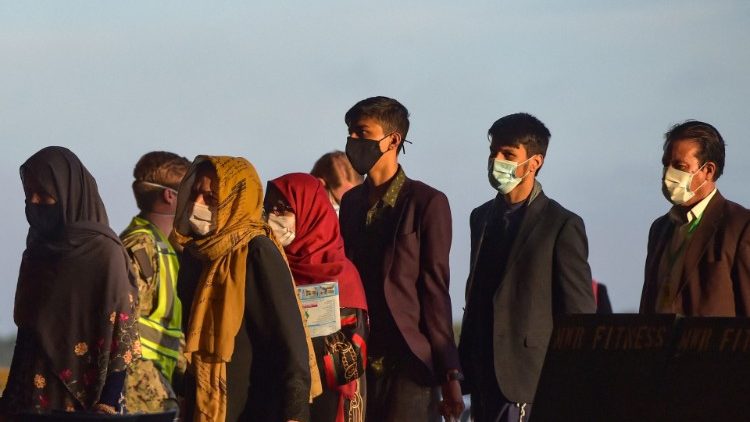 Pope Francis prays for vulnerable people fleeing Afghanistan, for the internally displaced, and for the dignity and future of young Afghans.

Pope Francis on Sunday asked States across the globe to welcome and protect vulnerable Afghans who are fleeing their country.

“In these troubled times that see Afghans seeking refuge,” he said during the Angelus, “I pray for the most vulnerable among them. I pray that many countries will welcome and protect those seeking a new life.”

Pope Francis said he is also praying for internally displaced persons in the country “that they may have assistance and the necessary protection.”

“May young Afghans receive education, an essential good for human development, and may all Afghans, whether at home, in transit, or in host countries, live with dignity, in peace and fraternity with their neighbours,” he said.

Pope Francis had already expressed his concern over the situation in Afghanistan on 15 August immediately after the Taliban had taken control of Kabul. On that occasion he asked everyone to unite in praying to “the God of peace so that the clamour of weapons might cease and solutions can be found at the table of dialogue.”

Meanwhile, on the ground in Afghanistan, the Taliban who have taken control of the country in the aftermath of the US troop withdrawal, have broken up a demonstration by women in Kabul demanding rights.

This is the latest of several protests by women in Kabul and Herat.

The women – who were calling for the right to work and to be included in the government – insist the Taliban targeted them with tear gas and pepper spray as they marched from a bridge to the presidential palace.

The Taliban, though, claim the protest got out of control.

A photograph of a woman, bleeding from her forehead, was widely shared on social media.

Since the takeover of Afghanistan last month, the international community has insisted the Taliban must respect human rights, including those of women, and not allow the country to become a breeding ground for militants.

Russian president Vladimir Putin has said the global community must join efforts to resolve existing problems in Afghanistan. Putin called the U.S. pullout from Kabul catastrophic, considering the resources and time spent in the region.

Meanwhile, fighting continues in the Panjshir valley, the last area holding out against Taliban rule in Afghanistan.

This anti-Taliban stronghold is home to around 200,000 people and hidden mountainous terrain.

As the fragile situation continues, UN Secretary-General Antonio Guterres is looking to avoid a looming humanitarian catastrophe. The United Nations will convene an international aid conference in Geneva on September 13.

Elsewhere, US Secretary of State Antony Blinken is scheduled to arrive in Qatar but he is not expected to meet anyone from the Taliban.

At the same time, The head of Pakistan’s spy agency, the ISI, General Faiz Hameed has arrived in Kabul but gave nothing away when questioned by reporters.

An official told Reuters earlier this week he could help the Taliban reorganise the Afghan military.