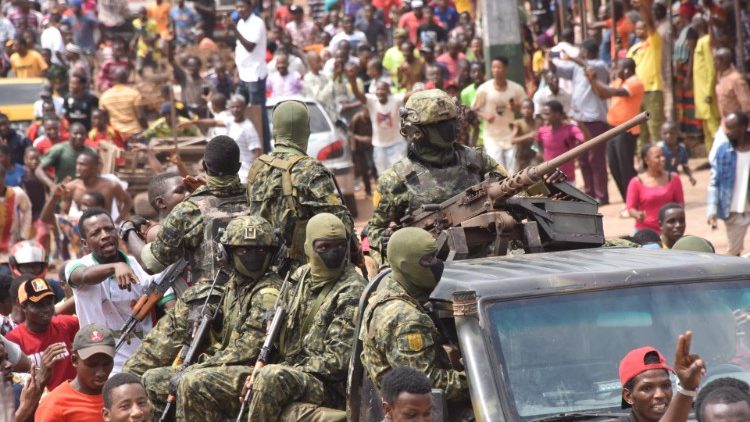 Members of Guinea’s armed forces announced a takeover of the government and the closure of the country’s borders. International organizations including the AU, UN, and ECOWAS have condemned the move and called for respect for the rule of law.

An elite army unit announced on Sunday that it had seized power in the West African country of Guinea, ousting 83-year-old president Alpha Condé, and imposing an indefinite curfew.

However, there seemed to be some confusion about who was in control of the country. The defense ministry also said that the attack on the presidential palace had been contained and the assailants had been repelled.

Colonel Mamadi Doumbouya, the head of the special forces unit, sat draped in a Guinean flag with other soldiers around him as he read an address on the national broadcaster, Radio Television Guinea. He said that they had dissolved its government, suspended the constitution, and closed the land and air borders.

Doumbouya said that “poverty and endemic corruption” had driven his forces to depose President Condé and that the country will “no longer entrust politics to one man” but rather to the people. “We are taking our destiny in our own hands,” he added, further criticizing the Condé-led administration. “The personalization of political life is over.”

International organizations, including the United Nations (UN), the African Union (AU), and the Economic Community of West African States (ECOWAS), as well as several foreign governments, have condemned the move by the Guinean special forces.

UN Secretary-General António Guterres condemned the takeover of the government “by force of the gun” in a tweet and called for the immediate release of President Alpha Condé.

Similarly, ECOWAS chair, President Nana Akufo-Addo of Ghana reaffirmed the regional bloc’s disapproval of “any unconstitutional political change” in Guinea. He called for respect for the “physical integrity” of president Condé and for his immediate and unconditional release, as well as that of all those who have been arrested.

In a tweet, the High Representative of the EU for Foreign Affairs and Security Policy, Josep Borrell Fontelles also joined his voice in condemning the power seizure by the Guinean forces and called for the immediate release of President Alpha Conde. He also appealed for respect for the rule of law in the interest of peace and the well-being of the people.

President Alpha Conde was sworn in for a third term last December after a disputed election. He initially came to power in 2010 in the country’s first democratic election since its independence from France. Many saw his presidency as an opportunity for a fresh start for the nation.

Last year, violent demonstrations broke out after Condé organized a referendum to modify the constitution to enable him to run again. The unrest further intensified after he won a contested October election. Several people were reportedly killed during the crisis.

In recent weeks, the government increased taxes and raised the price of fuel by about 20 percent, causing widespread indignation among the population.

Despite overseeing some progress in the country, Condé failed to improve the lives of Guineans, many of whom are living below the poverty line in spite of the country’s vast mineral riches of bauxite and gold.

This latest upheaval in Guinea is the fourth attempted coup in West Africa in just over a year, with two military takeovers in Mali and a failed attempt in Niger since August 2020.