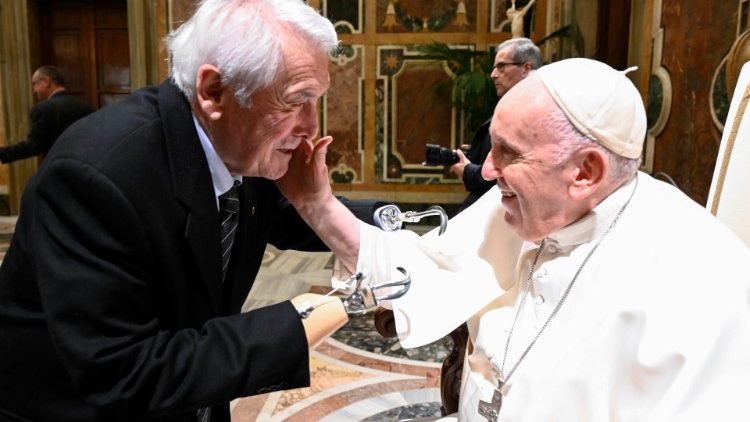 Pope Francis meets with members of Italy’s national association for disabled veterans and civil servants, and encourages them to become “a force for peace in society, helping to resolve conflicts peacefully and drawing attention to those least protected.”

Pope Francis met with a delegation of Italy’s national association for disabled veterans and civil servants (Unione Nazionale Mutilati per Servizio) at the Vatican on Saturday morning. In his address to the group, the Pope spoke about the importance of prayer, a powerful instrument, especially in the face of war, which seems like “an invincible monster.” He said we must address the conflicts in our daily lives “by avoiding all violence and overpowering force,” even when it comes to our words, as we strive to work for peace and harmony in our societies.

Italy’s national union for disabled veterans and civil servants is a non-profit organization based in Rome and present throughout the country, that provides care for those who have suffered injuries or illness during their military or civilian service. Members include the Carabinieri (the national police force), treasury police, penitentiary police, forestry service workers, and firefighters, among others.

The Pope welcomed around 200 representatives of the organization in the Vatican’s Clementine Hall. He thanked them for their gift to him of a crucifix with the image of the Good Shepherd, made especially for this occasion, but also a sign of their prayerful support for the Pope’s ministry. The Pope expressed his gratitude for their prayers, saying “I really need them, this work is not easy,” adding that their prayers are “the most beautiful gift” they can give him.

Call to be peacemakers

The Pope then highlighted the association’s commitment to peace, and how some have suffered a disability due to their service in a peace mission or guaranteeing public order, security, and respect for the law. This generous service shows the high moral patrimony of the association, he added. At the same time, he noted that everyone is called to share in this “commitment to be peacemakers,” as they have done in their service to others.

Peace in our words

In this world wounded by conflicts and divisions, the Pope explained that peacebuilding starts with small daily efforts, such as avoiding violence, including “verbal violence.” He noted that this is challenging but necessary because sometimes a word can be enough to hurt, injure, or kill a brother or sister, especially when it comes to slander or gossip, which is unfortunately so commonplace.

The association “can and must become a force for peace in society, helping to resolve conflicts peacefully, seeking the common good and drawing attention to those who are least protected,” the Pope encouraged its members. He noted how they, along with members of similar organizations, can give witness and meaning to the rest of society through their service and sacrifice, turning their suffering from injury or illness into a testament of service that is of “great moral and spiritual value.”

The power of love

The Pope acknowledged the burden their service has entailed, as their injury or illness does not disappear, but said it can be understood in a positive light, as seen in the mutual support members provide each other. Above all, the Pope concluded, this is possible through being united with the Lord, who “by the power of God’s love, transformed evil into good” – not in the abstract, but concretely “in Himself, in His personal experience, in His own flesh.”

Finally, Pope Francis prayed that the Lord may sustain and encourage them in their continuing help to one another and in their witness of service to society.

Pope calls for prayers for Nigerian priest and suffering Ukrainians